Gingrich: We Are Losing to an Enemy We Refuse to Name

Gingrich: We Are Losing to an Enemy We Refuse to Name
N&V Staff

Congress Needs a Strategy to Defeat Violent and Cultural Jihad 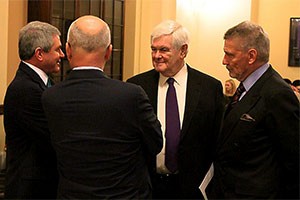 (Newt Gingrich) – Yesterday the House Committee on Homeland Security, under the leadership of Chairman Michael McCaul, held the first of a series of very important hearings on the threat of radical Islamism.

As I told the committee in my testimony, it is vital that the United States Congress undertake a thorough, no-holds-barred review of the long, global war in which we are now engaged with radical Islamists. This review will require a number of committees to coordinate since it will have to include Intelligence, Armed Services, Foreign Affairs, Judiciary, and Homeland Security at a minimum.

There are three key, sobering observations about where we are today which should force this thorough, no-holds-barred review of our situation.

These three points—which are backed up by the facts—suggest the United States is drifting into a crisis that could challenge our very survival.

First, it is the case that after 35 years of conflict dating back to the Iranian seizure of the American Embassy in Tehran and the ensuing hostage crisis, the United States and its allies are losing the long, global war with radical Islamists.

We are losing to both the violent Jihad and to the cultural Jihad.

The violent Jihad has shown itself recently in Paris, Australia, Tunisia, Syria, Iraq, Libya, Egypt, Gaza, Nigeria, Somalia, Afghanistan, and Yemen to name just some of the most prominent areas of violence.

In the 14 years since the 9/11 attacks, we have gone a long way down the road of intellectually and morally disarming in order to appease the cultural Jihadists who are increasingly aggressive in asserting their right to define how the rest of us think and talk.

Second, it is the case that, in an extraordinarily dangerous pattern, our intelligence system has been methodically limited and manipulated to sustain false narratives while suppressing or rejecting facts and analysis about those who would kill us.

For example, there is clear evidence the American people have been given remarkably misleading analysis about Al Qaeda based on a very limited translation and publication of about 24 of the 1.5 million documents captured in the Bin Laden raid. A number of outside analysts have suggested that the selective release of a small number of documents was designed to make the case that Al Qaeda was weaker. These outside analysts assert that a broader reading of more documents would indicate Al Qaeda was doubling in size when our government claimed it was getting weaker—an analysis also supported by obvious empirical facts on the ground. Furthermore, there has been what could only be deliberate foot-dragging in exploiting this extraordinary cache of material.

Both Lt. General Mike Flynn, the former head of the Defense Intelligence Agency, and Colonel Derek Harvey, a leading analyst of terrorism, have described the deliberately misleading and restricted access to the Bin Laden documents.

A number of intelligence operatives have described censorship from above designed to make sure that intelligence which undermines the official narrative simply does not see the light of day.

Congress should explore legislation which would make it illegal to instruct intelligence personnel to falsify information or analysis. Basing American security policy on politically defined distortions of reality is a very dangerous habit which could someday lead to a devastating defeat. Congress has an obligation to ensure the American people are learning the truth and have an opportunity to debate potential policies in a fact-based environment.

Third, it is the case that our political elites have refused to define our enemies. Their willful ignorance has made it impossible to develop an effective strategy to defeat those who would destroy our civilization.

For example, the President’s own press secretary engages in verbal gymnastics to avoid identifying the perpetrators of violence as radical Islamists. Josh Earnest said such labels do not “accurately” describe our enemies and that to use such a label “legitimizes” them.

This is Orwellian double-speak. The radical Islamists do not need to be de-legitimized. They need to be defeated. We cannot defeat what we cannot name.

There has been a desperate desire among our elites to focus on the act of terrorism rather than the motivation behind those acts. There has been a deep desire to avoid the cultural and religious motivations behind the Jihadists’ actions. There is an amazing hostility to any effort to study or teach the history of these patterns going back to the Seventh Century.

Because our elites refuse to look at the religious and historic motivations and patterns which drive our opponents, we are responding the same way to attack after attack on our way of life without any regard for learning about what really motivates our attackers. Only once we learn what drives and informs our opponents will we not repeat the same wrong response tactics, groundhog day-like, and finally start to win this long war.

Currently each new event, each new group, each new pattern is treated as though it’s an isolated phenomenon—as if it’s not part of a larger struggle with a long history and deep roots in patterns that are 1400 years old.

There is a passion for narrowing and localizing actions. The early focus was Al Qaeda. Then it was the Taliban. Now it is ISIS. It is beginning to be Boko Haram. As long as the elites can keep treating each new eruption as a free-standing phenomenon, they can avoid having to recognize that this is a global, worldwide movement that is decentralized but not disordered.

There are ties between Minneapolis and Mogadishu. There are ties between London, Paris and ISIS. Al Qaeda exists in many forms and under many names. We are confronted by worldwide recruiting on the internet, with Islamists reaching out to people we would never have imagined were vulnerable to that kind of appeal.

We have been refusing to apply the insights and lessons of history but our enemies have been very willing to study, learn, rethink and evolve.

The cultural Jihadists have learned our language and our principles—freedom of speech, freedom of religion, tolerance—and they apply them to defeat us without believing in them themselves. We blindly play their game on their terms, and don’t even think about how absurd it is for people who accept no church, no synagogue, no temple, in their heartland to come into our society and define multicultural sensitivity totally to their advantage—meaning, in essence, that we cannot criticize their ideas.

Our elites have been morally and intellectually disarmed by their own unwillingness to look at both the immediate history of the first 35 years of the global war with radical Islamists and then to look deeper into the roots of the ideology and the military-political system our enemies draw upon as their guide to waging both physical and cultural warfare.

One of the great threats to American independence is the steady growth of foreign money pouring into our intellectual and political systems to influence our thinking and limit our options for action. Congress needs to adopt new laws to protect the United States from the kind of foreign influences which are growing in size and boldness.

Sun Tzu, in the Art of War, written 500 years before Christ, warned that “all warfare is based on deception”. We are currently in a period where our enemies are deceiving us and our elites are actively deceiving themselves—and us. The deception and dishonesty of our elites is not accidental or uninformed. It is deliberate and willful. The flow of foreign money and foreign influence is a significant part of that pattern of deception.

We must clearly define our enemies before we can begin to develop strategies to defeat them.

We have lost 35 years since this war began.

We are weaker and our enemies are stronger.

Congress has a duty to pursue the truth and to think through the strategies needed and the structures which will be needed to implement those strategies.