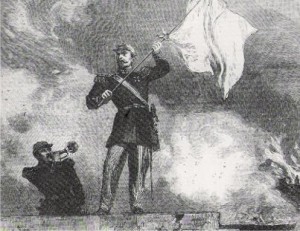 (Chuck Muth) – Fellow conservatives, enough is enough. We’re literally in a political war with the Left over Nevada’s budget. Alas, Republicans in the Assembly are being led by a guy who’s leading the charge waving a white flag.

It’s been rather frustrating, but kinda cute, watching over-his-head Republican Assembly Minority Leader Pete “Tax My Meat” Goicoechea try to “negotiate” with the Democrats. But before I get to the latest, and since I actually enjoy saying “I told you so,” allow me to remind everyone of what I wrote way back on October 27, 2010:

“From painful experience and history, we know that it’s not enough to just elect more Republicans; you need to elect better ones, as well. Unless you get to 15 principled conservatives in the Assembly, Gov. Sandoval still has to worry about tax hikes and veto overrides.

“At the very least, Republicans in the Assembly need a new caucus leader who understands that his role is to be the opposition party, not the minority party; fighting for principled, philosophical beliefs instead hoping to feast on some legislative table scraps while singing Kumbaya with the Democrats.”

My fear back then was that even if Republicans gained enough seats to deny Democrats a veto-proof majority, unless all of those Republicans were, you know, solid anti-tax hike conservatives that they’d be no better than the Democrats. And if they chose a wishy-washy, mamby-pamby “minority” leader, Republicans were gonna get rolled, as usual.

Indeed, in that regard here’s what I wrote on November 5, 2010, just two days after the general election.

“In 2011, Speaker John Oceguera will once again run circles around and over the hapless assembly Republicans under ‘Tax My Meat’ Pete.”

Boy, did I ever call that one or what?!!

Which brings us back to present day….

Gov. Sandoval has said no new taxes, no new fees, and no extension of the 2009 tax hikes which are scheduled to sunset on June 30th.

All ten of the Senate Republicans have said, in writing, that they’re with the Governor: No new taxes, no new fees, and no extension of the sunsets.

But with the exception of the four Republicans in the Assembly who have signed the Taxpayer Protection Pledge, none of the remaining dozen have made a definitive public statement, verbally or in writing, stating that they support the governor’s and their Senate colleagues’ position: No new taxes, no new fees and no extension of the sunsets.

Instead, Goicoechea and the majority of his caucus have been ham-handedly, not to mention foolishly – OK, stupidly – trying to negotiate an extension of the sunsets even though they (a) know the Democrats will never go for their deal, and (b) even if they did, the deal would never be approved by Gov. Sandoval and the Senate Republicans.

So here’s where we are….

On Tuesday, Assembly Democrats, who have agreed to none of Goicoechea’s five “demands,” sent a 10-page letter to Goicoechea falsely and disingenuously claiming that they have, saying they “look forward to continuing this discussion without delay.”

“Here, Charlie Brown, I’ll hold the football and you kick it.”

And sure enough, Goicoechea fell for it. Which brings us to his interview with Jon Ralston of the Las Vegas Sun on the floor of the Assembly Wednesday morning, after which Ralston wrote: “GOP Assembly leader: A deal can happen, governor won’t block it.”

According to Ralston, “Goicoechea said he believes there is a chance a deal can be struck to exchange reform measures for lifting tax sunsets” and that Gov. Sandoval was not “interfering in the negotiations or pressuring the lawmakers not to make a deal.” He added that Goicoechea “doesn’t believe Sandoval would turn the screws to persuade them not to vote to lift the sunsets.”

Shortly thereafter, Goicoechea was summoned to the gubernatorial woodshed. After getting his butt royally chewed for misleading the public on the governor’s position on extending the sunsets, the Minority Leader issued the following statement:

“I am appreciative that Nevada Democrats have finally decided to engage in discussions about the reality of the state budget. We must continue to examine ways to get our fiscal house in order and rein in government spending while maintaining our commitment to no new taxes. Governor Sandoval has made it clear that he will veto any legislation that raises taxes or extends sunsets and our caucus supports his position.”

Alas, at first read you’d think that FINALLY reality had penetrated that naively hard head of Goicoechea’s; that he and his caucus were finally on board and with the program along with their Senate colleagues.

This was a very carefully worded statement which needs to be parsed in the same manner one once had to parse anything Bill Clinton ever said (the meaning of “is”).

First, the Democrats haven’t engaged in good-faith discussions. They blew Goicoechea and the Republican “demands” off while pretending they’d already complied with those demands.

Secondly, Goicoechea asserts a “commitment to no new taxes.” However, it has been Goicoechea’s position, shared by a number in his caucus, that an extension of the $600+ million worth of to-be-sunsetted tax hikes is not “new taxes” since those taxes are already in place.

This “no new taxes” line is nothing more than an effort to trick conservatives and Nevada’s taxpayers into thinking Assembly Republicans are now solidly on the governor’s side. They’re not.

And finally, Goicoechea’s last sentence only says Sandoval does NOT support any deal for extending the tax hikes and that Goicoechea supports the governor’s right to veto any such deal. That statement does NOT say Assembly Republicans WON’T continue negotiating for a deal to extend the sunsets; only that they know the governor will veto it if they do.

In other words, nothing has changed. Assembly Republicans are still quietly working to stab Gov. Sandoval and their Senate colleagues in the back.

Indeed, after his statement was released, RalstonFlash reported the following: “Goicoechea later made it clear to the Sun’s David Schwartz that while he ‘supports’ the governor’s position, he is still negotiating with the Democrats.” In fact, he resumed those negotiations last night.

The ONLY thing keeping the Legislature from finishing its business by June 6 are these Republicans in the Assembly who are keeping tax-hike hope alive by refusing to take an extension of the $600+ million worth of sunsets off the table, which would force the Democrats to face reality and accept that which they cannot change.

Conservatives have met the enemy. Alas, it’s not the Democrats. It’s the usual gaggle of “useful idiots.” Just as predicted.

For all the good it will do, here’s “Tax My Meat” Pete’s contact information:

N&V StaffOctober 4, 2022
Read More
Scroll for more
Tap
Morrison: The Rest Of The Story
The Two Faces of Speaker Oceguera