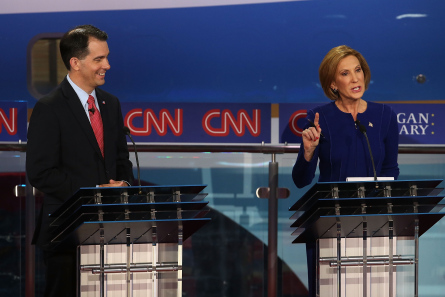 (Emily Cahn, Simone Pathé & Eli Yokley, Roll Call) – After bullying his way through the first Republican presidential debate a month ago, front-runner Donald Trump was clearly the target in Wednesday’s second debate, and most of his opponents tried to take shots at him.

By all accounts, Carly Fiorina followed a strong performance in last month’s undercard debate and made the most of her elevation to the prime-time stage, taking on Trump and scoring a couple mic-dropping moments.

One-time front-runner, Jeb Bush, was a bit more energetic, trading shots with Trump at the center of the stage and getting a laugh when he admitted to smoking marijuana 40 years ago but immediately apologizing to his mother. Where was that show of hands from the first debate when the subject of marijuana came up?

CNN’s Jake Tapper grooved a pitch to Fiorina, asking her to respond to Trump’s remarks in a Rolling Stone interview about her appearance. Fiorina blasted it out of the park, saying, “I think women all over this country heard very clearly what Mr.Trump said.”