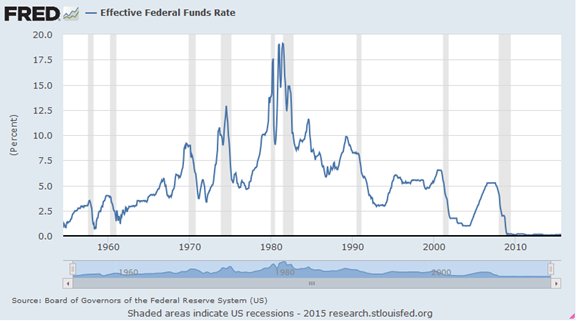 And so, naturally, U.S. stock markets rallied in anticipation that the bad news might forestall a Federal Reserve interest rate hike on Thursday.

Such is the perverse state of markets in the era of near-zero percent interest rates, where bad economic news is good news for investors who are still addicted to easy money from the Fed.

Overall, the news could mean that another recession is just around the corner. Which, averaging a downturn once every six to seven years, the economy is practically due for another.

All of which leaves the central bank between a rock and a hard place.

With markets so jumpy, many analysts warn that a Fed rate hike right now could result in inverted interest rates that might propel the economy into the very recession that is feared.

On the other hand, the longer the Fed waits to hike interest rates — which have stood at near-zero percent since 2008 — the less room it will have to move when the economy does turn south again.

Come Thursday, if there is no rate hike, it might be seen as a vote of no confidence in the economy, since it would be clear the Fed had forestalled its plans for policy normalization.

In that vein, why should a slowdown in China, for example, be the cause for the Fed to change its long-term plans here, unless there were downside risks posed by these global market developments in the U.S.?

Increasing rates, by contrast, might have been a show that the economy has recovered sufficiently from the financial crisis to justify ending the Fed’s emergency posture — like, 12 months ago.

Today the move could be viewed as bearish since the central bank tends hike rates right before recessions anyway and it may have already waited too long to act.

Meaning, no matter which direction the central bank moves on Thursday, if any, there will be naysayers.

Leaving aside the necessity of the Fed setting the short rate at all — couldn’t markets handle that? — perhaps it should just get the rate hike over with, and let the chips fall where they may.

After all, the party can’t go on forever. Can it?

N&V StaffSeptember 29, 2022
Read More
Scroll for more
Tap
Time to Clamp Down on High-Tech Ambulance Chasing Extortionists
Mitchell: People should mold government, not the other way around