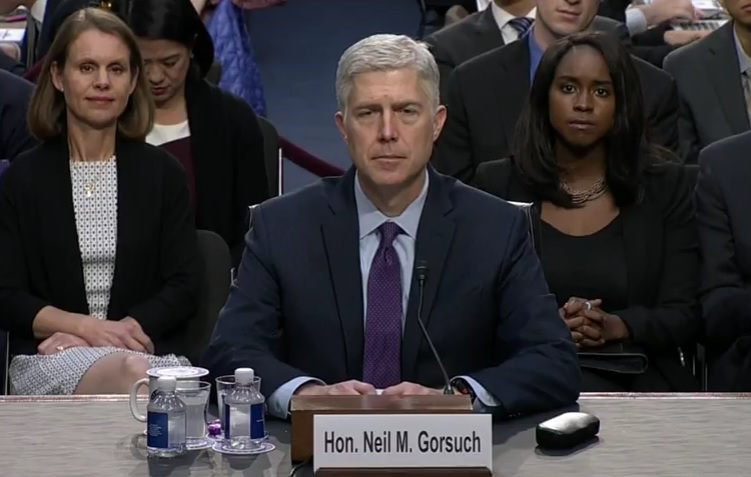 (Kevin Daley, The Daily Caller News Foundation) – Judge Neil Gorsuch survived a marathon 11-hour grilling before the Senate Committee on the Judiciary Tuesday, avoiding missteps and ducking controversy as the panel considers his nomination to the Supreme Court.

Gorsuch appeared comfortable throughout the hearing, reclining in his chair and angling towards senators. He affected the manner of a westerner, with answers heavy on words like “goodness,” references to mutton busting, and the odd dad-joke. He took a cautious posture throughout the proceedings, offering narrowly tailored answers and declining to make comments that could implicate his views of pending litigation.

To this extent, the hearing followed the trajectory of recent confirmations, in which nominees disclosed almost nothing about their views of pending cases or major controversies of law, while members of the opposition party expressed frustration at the nominee’s evasiveness. Democratic Sen. Mazie Hirono of Hawaii, the final Democrat to question the judge, argued he had answered fewer questions than any recent Supreme Court nominee.

Throughout the day, Democrats repeatedly questioned Gorsuch about his independence, his role in crafting policies governing conditions at Guantanamo Bay, abortion, campaign finance laws — particularly the Supreme Court’s landmark ruling in Citizens United, — judicial deference to the determinations of federal agencies, and a case in which Gorsuch argued the law allowed a company to dismiss an employee for abandoning a company truck in the freezing cold.

Hoping to strip Democrats of a potent line of attack, Gorsuch repeatedly asserted his independence from President Donald Trump, or any other political actor. The committee’s chairman, GOP Sen. Chuck Grassley, put the issue front and center from the start of the hearing, asking the judge if he would have any difficulty ruling against Trump in future litigation.

“That’s a softball, Mr. Chairman. I have no difficulty ruling for or against any party based on what the laws and facts in the particular case require. And I’m heartened by the support I have received from people who recognize that there’s no such thing as a Republican judge or a Democratic judge. We just have judges in this country.”

He also promised the committee he had not made guarantees to any person about how he would rule in a future case.

“I have offered no promises on how I would rule in any case to anyone,” he said. “And I don’t think it is appropriate for a judge to do so no matter who is doing the asking.”

He further said he would not approach any case with preexisting biases and restrict his judgement to the dictates of the law.

“I go through it step by step and keeping an open mind through the entire process as best as I humanly can,” he said. “And I leave all the other stuff at home and I make a decision based on the facts and the law. Those are some of the things judicial independence means to me.”

In one of the marquee moments of the hearing, Gorsuch told the panel he found attacks on the federal judiciary “disheartening and demoralizing,” in response to a question from Democratic Sen. Richard Blumenthal of Connecticut about Trump’s attacks on federal judges.

“When anyone criticizes the honesty or integrity or motives of a judge, I find that disheartening,” Gorsuch said. “I find that demoralizing.”

Blumenthal asked if that included Trump.

“Anyone means anyone,” Gorsuch replied.

Democratic Sen. Dianne Feinstein of California asked Gorsuch a series of questions about his brief tenure at the U.S. Department of Justice, where he played a role in shaping legal strategies connected to Bush-era national security policies.

Feinstein first asked about talking points prepared for Attorney General Alberto Gonzales in advance of a press conference about detainees. Gorsuch, according to the senator, wrote “yes” in a column next to a hypothetical question in the talking points that asked if enhanced interrogation yielded useful information.

“What information did you have that the Bush administration’s aggressive interrogation techniques were effective?” she asked.

Gorsuch replied that he could not recall, as the incident had taken place over a decade ago. Feinstein’s office plans to furnish the judge with the relevant documents and return to the issue during the second round of questioning.

She also asked about comments Gorsuch made in an email that suggested he condoned the legality of waterboarding in the face of a new law that explicitly banned it. In signing the law, former President George W. Bush issued a “signing statement,” which described his view of the law. Feinstein says Gorsuch argued that Bush could issue a statement saying that he viewed the law as codifying existing interrogation practices — including waterboarding.

“Doesn’t it mean that when you wrote this email you were condoning waterboarding as lawful?” she asked.

Gorsuch replied that he could not remember the specifics of the email. He did say, however, that a conflict within the Bush administration emerged when the signing statement was being drafted. Individuals close to Vice President Dick Cheney favored a more aggressive statement, while officials in the U.S. Department of State advocated for a narrower signing statement. He then said, as a general matter, that he sided with State Department lawyers during inter-agency fights about detainees and interrogation.

Though abortion did not solicit as much attention as it has in recent confirmation hearings, the topic did generate one of the most memorable exchanges of the day.

GOP Sen. Lindsey Graham of South Carolina asked Gorsuch how he would have reacted had President Trump asked him to overturn Roe v. Wade during their interview.

“No, I would have walked out the door,” Gorsuch replied. “That’s not what judges do.”

Feinstein asked Gorsuch if he viewed Roe as being “super-precedent,” or a decision that had been upheld multiple times and used to justify a wide-range of other rulings.

“Do you view Roe as being super-precedent?” she asked.

“It has been reaffirmed many times, I can say that,” Gorsuch responded, though he stopped short of agreeing it was “super-precedent.”

A case in which Gorsuch ruled in favor of a company that fired one of their employees for abandoning a company-issued vehicle in the freezing cold was the focal point of Democratic attacks on Gorsuch. The case was raised by almost every Democratic member of the committee.

The most pointed attack on the issue came from Minnesota Democratic Sen. Al Franken, who called Gorsuch’s opinion in the case absurd.

The relevant law advised that an employee could not be fired if he refused to operate a vehicle in an unsafe environment. In this instance, the driver unhitched his cab from a cargo hold and then drove away because of frigid winter conditions, despite explicit guidance from his company to the contrary. The driver was beginning to develop symptoms of frost bite, and possibly hypothermia, and said he felt he had no choice but act as he did.

A federal administrative review board ruled in the driver’s favor.

The 10th U.S. Circuit Court of Appeals concluded that the term “operate” in the statute was vague, and therefore they should defer to the review board’s determination.

Gorsuch said he struggled with the case but ultimately concluded the law was clear.

“He chose to operate,” Judge Gorsuch said. “I think by any plain understanding, he operated the vehicle,” he added.

“That’s absurd,” Franken said. “Now, I had a career in identifying absurdity, and I know it when I see it.” Franken was a comedian on “Saturday Night Live” before the start of his political career.