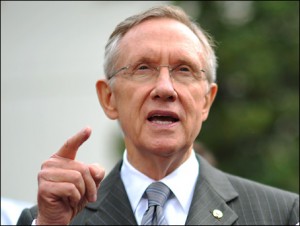 (Thomas Mitchell/4th St8) – The urge to tell others how they should behave is darned near insatiable — and almost always destructive.

Thus it is with things like Harry Reid’s “The National Clean Energy Summit 4.0: The Future of Energy,” which will be Aug. 30 at CityCenter — the house that Reid build by browbeating reluctant lenders on behalf of MGM Resorts.

“Nevada is proud to host the fourth annual National Clean Energy Summit, an important opportunity for national and state leaders to see firsthand how Nevada is a leader in building a 21st century clean energy future that can be emulated across the country,” says Harry on his website. “By capitalizing on our state’s vast renewable resources like wind, solar, and geothermal energy, we are creating good paying jobs, reducing our dependence on oil, lowering energy costs for consumers, and diversifying our economy to promote growth.”

Hello, I’m from central planning and I’m here to tell you what job you’ll get, where you get your power, the mileage your car must have, the type of light bulb you may buy and the amount of water your shower and toilet use. Please check your freedoms at the door.

Reid’s announcement quotes John Podesta, president and CEO of the Center for American Progress, a former Clintonista, as saying, “Investments in clean energy have created tens of thousands of jobs in the midst of an economic downturn. We can have a brighter economic and energy future if we continue and expand investments in clean technologies.”

Since when is taking our tax dollars and giving them to favored companies an investment? If they want to invest, use their own (expletive deleted) money.

All this sounds so neat, sweet, compact and appealingly simple. It is evil incarnate.

F.A. Hayek witnessed the rising enthusiasm for governmental planning in Germany in the late 19th century and then in Russia and Italy and, eventually, in England under the guiding hand of John Maynard Keynes. He writes about it in “The Road to Serfdom.”

Planning is a necessary aspect of life and society, Hayek concedes, “The question is whether we should create conditions under which the knowledge and initiative of individuals are given the best scope so that they can plan most successfully; or whether we should direct and organize all economic activities according to a ‘blue-print,’ that is, ‘consciously direct the resources of society to conform to the planners’ particular views of who should have what.’”

Aren’t we fortunate to have Harry and Barack to tell us what electricity to buy. When the price skyrockets, it is for our own good and the good of the planet. Same for health insurance.

Now, if we were to go back to the early part of the 21st century, back before we were all scared witless and wattless by Enron, there was a move afoot to turn Nevada Power into nothing but a monopoly power delivery company, rather like a pipeline or trucking company that transmits a seller’s goods to the purchaser and collects a fee for doing so. The home or business owner would choose a generation company and the price would be set by the market. The coal-fired or natural gas-fired turbine operator could set a price and compete against the geothermal, hydropower, solar and wind companies. Save the planet acolytes might be willing to pay a bit more for “green” energy.

But that idea was squashed like a bug on the windshield of Enron’s market manipulation. Instead of merely punishing the wrongdoers, our lawmakers tried to devise a way to control the market so that such manipulation could never happen again. The price of electricity continues to rise, partly because our supreme masters at the Nevada Legislature have dictated that a certain portion of our electricity come from renewable sources. No free market. No choice in the matter.

Choice, that’s why there’s a market for 10-year-old whiskey as well as rot gut — and sirloin and hamburger.

But all the scientists agree we must do something to prevent global warming now, you say.

Hayek also makes note of how the collective must squelch the “denier.”  He writes, “Public criticism or even expressions of doubt must be suppressed because they tend to weaken support of the regime. As Sidney and Beatrice Webb report of the position in every Russian enterprise: ‘Whilst the work is in progress, any public expression of doubt that the plan will be successful is an act of disloyalty and even of treachery because of its possible effect on the will and efforts of the rest of the staff.’”

Been there, heard that.

Now, back to that use of the word “investment” that comes up so frequently when it comes to planning our “green” energy and jobs. Hayek, like Orwell soon after, recognized the perversion of the language as a brambled path.

“The most effective way of making people accept the validity of the values they are to serve is to persuade them that they are really the same as those they have always held, but which were not properly understood or recognized before,” writes Hayek. “And the most efficient technique to this end is to use the old words but change their meaning. Few traits of totalitarian regimes are at the same time so confusing to the superficial observer and yet so characteristic of the whole intellectual climate as this complete perversion of language.”

A free market in which people can freely exchange goods in a manner satisfactory to both, leaves individuals free. It fosters innovation. Government control through planning and regulations is incompatible with personal and political freedom and leads inexorably to serfdom. It drowns innovation in its infancy.

What do you mean you don’t have a permit to do that?

Here’s Harry planning our future (note the use of the word “invest”):

One chapter in Hayek’s book is titled: “Why the Worst Get to the Top.”

N&V StaffSeptember 8, 2022
Read More
Scroll for more
Tap
Berkley Is Far Out Of Mainstream On Abortion
Rating Agency Executives Should Work From Alcatraz