The hearing is scheduled for multiple weeks beginning Sept. 26. Public comment is scheduled for Oct. 7 starting at 8 a.m. and will be video cast from several locations. The locations for public comment are the Nevada Legislative Building in Carson City, Room 1214; the Grant Sawyer State Office Building in Las Vegas, Room 4412; and the Great Basin College in Ely, Room 112. 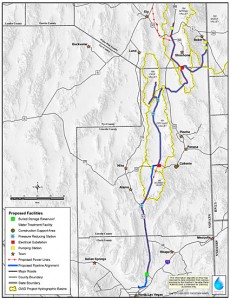 Written public comments are also being accepted until 5 p.m. on Dec. 2. Comments should be addressed to the attention of Susan Joseph-Taylor, chief hearing officer, Office of the State Engineer, 901 South Stewart Street, Suite 2002, Carson City, Nevada 89701.

The hearing will be broadcast by audio and video on the internet from the Nevada Legislature.

The hearing will be held during normal business hours. The schedule of case presentations is:

– Nov.16: Corporation of the Presiding Bishop of the Church of Jesus Christ of Latter Day Saints (protestant).

The total acre-feet of groundwater requested by SNWA from Delamar, Dry Lake, Cave and Spring Valleys is 125,976 acre-feet. There are applications pending in other hydrographic basins that have not been acted on, and the protest period on those applications will also be re-opened when the State Engineer is ready to move forward with action on those applications.

An overview of Nevada water law is also available.