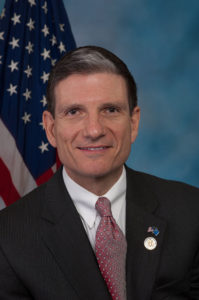 (Greg Lemon, Heck.house.gov) Legislation introduced by Congressman Joe Heck (NV-03) called the Vulnerable Veterans Housing Reform Act (H.R. 1816) was signed into law Friday as part of H.R. 3700, the Housing Opportunity Through Modernization Act. The House passed the bill by a vote of 427-0 in February and the Senate approved the measure on July 15.

Rep. Heck’s bill, which also passed the House as a stand-alone measure in May of 2015 and during both the 112th and 113th Congresses, ends the flawed Department of Housing and Urban Development (HUD) policy of counting the aid and attendance benefit for low-income, disabled veterans as regular income. By counting the aid and attendance benefit intended for medical care as income, HUD is unfairly and incorrectly inflating that veteran’s income amount. That inflation then results in HUD reducing the housing assistance available to low-income, disabled veterans.

“With this bill being signed into law, our most vulnerable veterans can breathe a sigh of relief,” Rep. Joe Heck said. “Finally ending this flawed HUD policy will ensure low-income, disabled veterans get the medical care and assistance they need without having to fear losing their home or apartment. We still have work to do to eradicate veterans homelessness, but this bill is a big step in the right direction.”

This issue was first brought to Congressman Heck’s attention during a 2011 meeting of his Veterans Advisory Panel. The panel brings local veterans together to discuss the issues facing southern Nevada’s veteran community.

In addition to the veterans housing measure, Rep. Heck is also working to advance legislation aimed at speeding access to care within the VA and providing job opportunities for veterans. The bill, H.R. 3974, The Grow Our Own Directive: Physician Assistant Employment and Education Act of 2015, establishes a five-year pilot program within the VA to provide educational assistance to former medics and corpsmen for education and training as physician assistants in the VA. Those who serve in the pilot program would then have a period of obligated service at the Veterans Health Administration, allowing them to give back to fellow veterans.

H.R. 3974 was approved by the House Committee on Veterans Affairs in May and could be brought to the floor for a vote when the House returns to session in September

N&V StaffSeptember 20, 2021
Read More
Scroll for more
Tap
Mainstream Media Either Acting Like Children or ARE Children Which Is Why They Have Been So Wrong This Year
Here’s Why Bi-Partisan Support for U.S. Sugar Program Must Continue