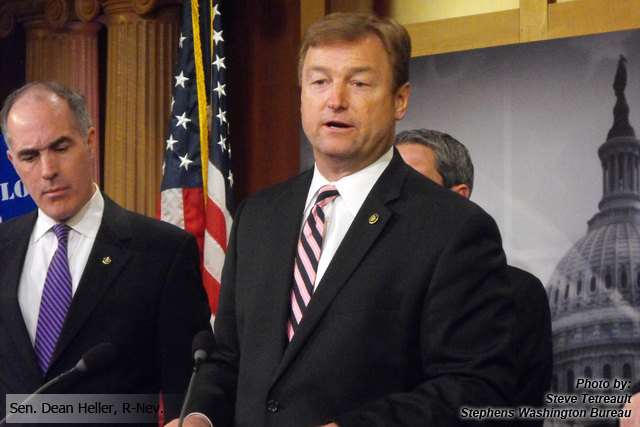 (Laura Myers of Las Vegas Review-Journal) – U.S. Sen. Dean Heller on Wednesday played down any notion that Nevada might suffer much from a loss of political power when U.S. Sen. Harry Reid retires.

Heller, R-Nev., said the same worries were expressed three decades ago when U.S. Sen. Paul Laxalt, R-Nev., retired, only to be replaced by Reid, D-Nev., who won his first Senate election in 1986.

“There was concern there would be a big void,” Heller said. “And certain people filled those shoes, Senator Reid being one of them. He did a great job. So it’s the responsibility of us that are the remainder of the delegation to step up.”

Heller also weighed in on the 2016 election to replace Reid, saying whoever wins the election — Republican or Democrat — will surely have survived a crucible and will serve Nevada well.

“Obviously, there’s going to be a tough race to replace him,” Heller said. “And it’s my opinion that whoever comes out of that race will be a strong partner and will do everything that they can to continue the legacy of both him and Paul Laxalt and others that have served before.”