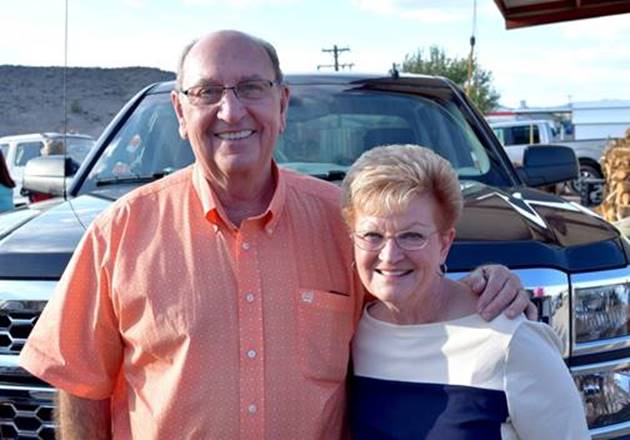 Dave Maxwell
Bob and Sandy Ellis of Henderson have donated tennis shoes and socks to all the school kids in Lincoln County for the last eight years.

For the past eight years, Bob Ellis, former Las Vegas valley businessman, and his wife Sandy have personally been involved in distributing tennis shoes to the students at the elementary schools in Lincoln County. They do it for some select schools in Clark County as well.

As a kickoff for the program here in Lincoln County this year, the Ellis’s hosted an old-fashioned Dutch oven dinner Sunday night at the Cathedral Inn in Panaca.

March, a past chair of the Nevada League of Cities and Municipalities, and a social worker in Ely in the 1980s with Lincoln County in her district said she was glad to be able to come up with the Ellis’s this time. “I’m told it’s an exciting moment for the kids.”

On Monday, a school assembly was held at the Caliente Elementary School after which the shoe sizes and socks for all the children in the five elementary schools in the county were taken by three representatives from Payless Shoes. Shoe sizes for Meadow Valley Middle School and Pahranagat Valley Middle School, plus the two high schools, will also be given by school officials to the people from Payless Shoes.

Ellis said the Dutch oven dinner idea was given to him by a person with relatives in Lincoln County and turned out to be “a great way for people to sit down and talk about things.”

In addition to the shoes, the Ellis’s also donated money to the schools to buy school supplies, “or for whatever they need,” he said. “Some have, I think, even used some of the money to go on field trips. It brings the community together and the kids know that there is somebody out there looking after them and wanting to help them.”

Not only are shoes and socks donated by the Ellis’s, but they also donate toys for the younger students. The shoes and presents are expected to be delivered in December.

Ellis said he planned to share with the kids during the school assembly that they can feel assured that there is someone they can talk to when troubles may occur at school or at home. “It might be a teacher; it might be the principal, but there is somebody. One of my biggest fears is for kids who are maybe being bullied by anyone.”

In speaking about his overall feeling of eight years of service to Lincoln County and nearly 15 years in Clark County, Ellis said, “This is our Christmas. This is what we enjoy doing. Just the smiles on the kids’ faces. It just brings joy to our hearts and opens us to these kids, and for our friends who come up with us and the local people who come out to show their support, that means a lot to us.”

The Ellis’s have recently been nominated by the Clark County School District as finalists to have a new elementary school named for them. The nominees were graded by the selection committee under six categories, including a person’s contribution to education and impact on Clark County children.

Former Nevada governor Richard Bryant nominated the Ellis’s. He said, “The Ellis’s have contributed a great deal of financial support to our schools, and they don’t just send a check.”

Ellis said, “We are very humbled and proud to receive the nomination. It’s a great honor. Education is the future for the kids and we want to see these kids stay in school. That’s our goal.”