High and mighty judges decide what is law and scripture 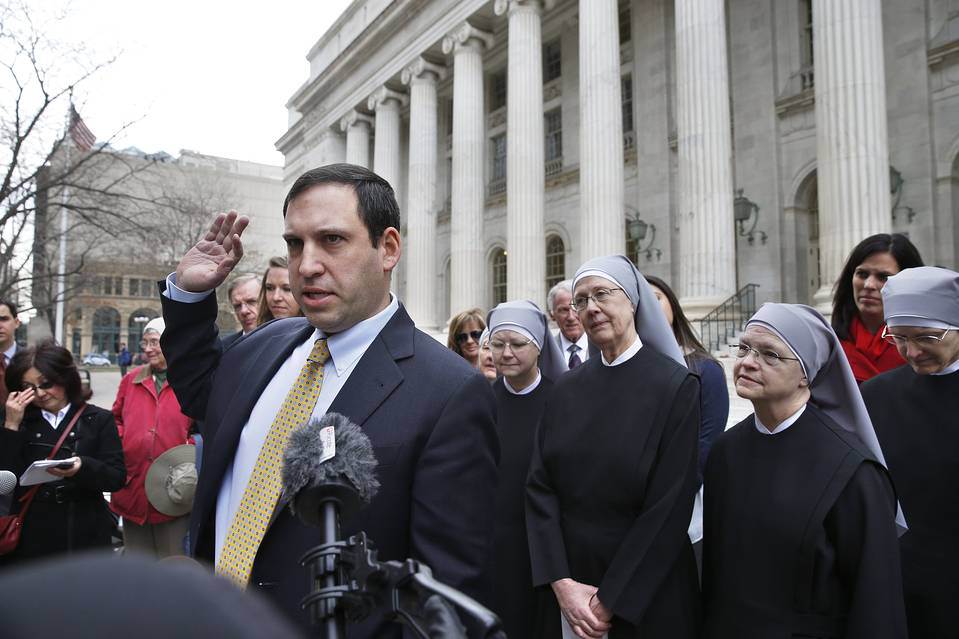 Attorney Mark Rienzi, who represents the Little Sisters of the Poor, speaks outside the 10th U.S. Circuit Court of Appeals, in Denver. (Photo by AP)

(Thomas Mitchell) – Some judges don’t just practice law, they are also Talmudic scholars — better capable of determining matters of conscience than adherents of the religion itself.

The Little Sisters of the Poor in Denver sued to avoid complying with Obamacare’s mandate that all insurance provide contraceptives and refused to comply with the so-called opt-out contract in which their insurer is required to cover birth control for free. They essentially argued that signing the contract made them complicit in a sinful act.

The 10th U.S. Circuit Court of Appeals ruled this week: “Although Plaintiffs allege the administrative tasks required to opt out of the Mandate make them complicit in the overall delivery scheme, opting out instead relieves them from complicity. Furthermore, these de minimis administrative tasks do not substantially burden religious exercise for the purposes of RFRA (Religious Freedom Restoration Act).”

The Little Sisters’ consciences and souls are of no consequence.

If they refuse to sign the opt-out contract, each of their shelters is subject to fines of $2.5 million a year. That’ll really make them poor.

“In other words, the Little Sisters believe they are commissioning a moral transgression,” a Wall Street Journal observes in an editorial under the headline, “Big Brother of the Poor.” “The Tenth Circuit is telling them, no, the opt out is ‘unremarkable.’ Yet, standard judicial practice is to refrain from reaching unresolvable questions of theology or ethics, and RFRA was written to give the benefit of the doubt to the faithful.”

In Burwell v. Hobby Lobby the Supreme Court observed: “The Hahns and Greens believe that providing the coverage demanded by the HHS (Health and Human Services) regulations is connected to the destruction of an embryo in a way that is sufficient to make it immoral for them to provide the coverage. This belief implicates a difficult and important question of religion and moral philosophy, namely, the circumstances under which it is wrong for a person to perform an act that is innocent in itself but that has the effect of enabling or facilitating the commission of an immoral act by another. Arrogating the authority to provide a binding national answer to this religious and philosophical question, HHS and the principal dissent in effect tell the plaintiffs that their beliefs are flawed. For good reason, we have repeatedly refused to take such a step.”

This case is surely headed to the Supreme Court where it should stand up for the Free Exercise Clause of the First Amendment.

This column was originally published in Mr. Mitchell’s blog.

N&V StaffSeptember 29, 2022
Read More
Scroll for more
Tap
GOP has nobody but themselves to blame for nuclear Iran
Gingrich: Losing the War with Iran