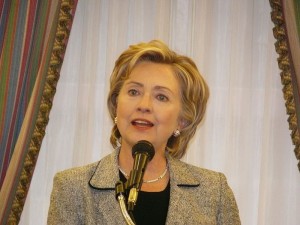 Because of these three gifts, the debate that the DNC had scheduled to be obscure and unnoticed on the Saturday night before Christmas may have a very significant impact on the 2016 election.

The first gift was what Secretary Clinton had to say about ISIS: “We now finally are where we need to be. We have a strategy and a commitment to go after ISIS which is a danger to us as well as the region, and we finally have a U.N. Security Council resolution bringing the world together to go after a political transition.”

Second, Clinton asserted during the debate that Donald Trump is becoming “ISIS’s best recruiter.” She went on to charge that “they are going to people showing videos of Donald Trump insulting Islam and Muslims in order to recruit more radical jihadists.”

Third, Clinton described the growing cost of health care and skyrocketing premiums as a “glitch” of Obamacare.

First, the idea that “we are where we need to be” with ISIS will strike most Americans as delusional in the Obama tradition. Most Americans believe that ISIS is winning. Virtually every week there are new attacks in new countries. People are just beginning to understand how big the problem of Islamic supremacism is.

To have Secretary Clinton assert that we are just where we need to be will strike most Americans as an extraordinarily dangerous statement coming from a potential commander-in-chief.

Furthermore, the logic built into her statement is a reminder of how deeply committed she is to the left’s intellectual worldview.

The left believes that the United Nations is a big deal. To them, a United Nations resolution is a major victory. As Hillary put it, we are “bringing the world together to go after a political transition.” That is the language of the legalistic left dating back to Woodrow Wilson, who thought he was fighting the war to end all wars. Instead, it turned out that World War I was the precursor to World War II which was followed by the Cold War and which has now been followed by the war with Islamic supremacists. Wilson ended, but war didn’t.

So, after six years of failure in the Middle East, the failure of the “Russian reset”, the continued aggression of the Iranians (who have now launched two ballistic missile tests in clear violation of a U.N. resolution), Hillary continues to believe in a legalistic, diplomatic dance as the solution to a violent military problem.

What “political transition” in Syria is Hillary talking about? Who would impose such a transition? And if we are, in Hillary’s mind, where we need to be, Americans should hope we never end up in a bad place because this one seems bad enough.

Hillary’s second gift, her attack on Donald Trump, undermines her in two ways.

First, every fact checker said there was no evidence to back up her claim that ISIS is using Trump in its recruitment videos. This further deepens the sense that Hillary lies and says anything she needs to without regard to facts.

Second, somewhat ironically it turned out that while ISIS does not currently use Trump in their videos, there is an American politician they do use. Unfortunately for Hillary, the famous American in the ISIS video is her husband, former President Bill Clinton. If Hillary had not attacked Trump about the ISIS video, it is possible no one would have noticed Bill was in the videos.

Hillary’s third gift, her description of the exploding cost of health care as a “glitch” of Obamacare, may end up hurting her most of all. Secretary Clinton implicitly acknowledges that Obamacare’s failure has caused deductibles to go up by an average of 67 percent and health insurance costs to increase by 27 percent. Obamacare, of course, was supposed to deliver lower costs and more “affordable” care.

It isn’t often that a candidate gives the opposition party three gifts for Christmas.

Republicans should be grateful to Hillary for this remarkable, if unintended, performance. The debate the Democrats hoped no one would notice has become a debate that will last for months–possibly all the way to election day.