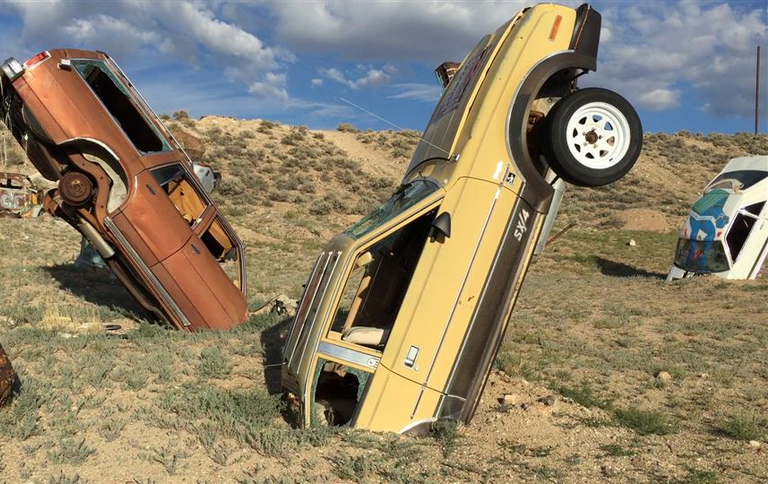 Near the small town of Tonopah, Nevada, sits the International Car Forest of the Last Church — a dirt lot filled with old cars sticking out of the ground. (Photo by Jim Carlton, The Wall Street Journal)

(Jim Carlton, The Wall Street Journal) – TONOPAH — Jerry and Etta Burch were looking for some new and different things to see on their cross-country trek this summer. The retirees weren’t quite expecting what they found in this desert outpost.

Checking into the 108-year-old Mizpah Hotel in early July, the Portsmouth, Va., couple discovered that it, as well as several other sites nearby, is supposedly haunted. At the nearby Tonopah Historic Mining Park the next day, a sudden blinding dust storm enveloped their all-terrain-vehicle tour of silver mines that have been closed for more than half a century.

“We have not been to anything like Tonopah,” said Mrs. Burch, 69 years old, a former government contract employee.

That could serve as the quintessential review for one of Nevada’s newest—and most unusual—tourist destinations. Tonopah (pop. 2,757) sits halfway between Las Vegas and Reno, about 100 miles from the next closest gas station. After enjoying a long period of boom and bust based on mining and the military, in recent times it has been primarily a pit stop for motorists passing through on U.S. 95 to fill up.