How to stop the Iran nuke deal

How to stop the Iran nuke deal
N&V Staff 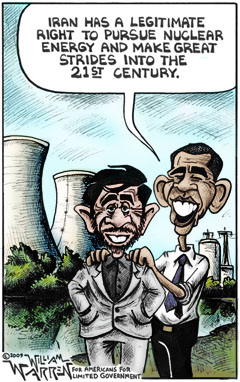 (Robert Romano for NetRightDaily.com) – Love it or hate it, the Iran nuclear deal is done, and unless Congress acts to stop it, within 60 days, it will take full effect.

Whether the Obama administration was going to unilaterally lift sanctions on Iran via waivers or certain certifications like being delisted as a state sponsor of terrorism or no longer pursuing a nuclear weapons program — none of it matters any more. It’s a moot point.

After all, when Congress overwhelmingly voted for H.R. 1191, legislation by Sen. Bob Corker (R-Tenn.) in May, Obama was given all of the authority he needs to lift the sanctions.

The law provides that “any measure of statutory sanctions relief by the United States pursuant to an agreement [with Iran]… may be taken, consistent with existing statutory requirements for such action, if, following the period for review provided… there is not enacted any such joint resolution” by Congress disapproving of the deal.

Obama has already promised to veto any such resolution of disapproval, and 150 House Democrats in May signaled they will be voting to sustain such a veto.

By now, members of Congress have had an opportunity to review the deal, and to determine for themselves if it will be effective at stopping Iran’s nuclear weapons program.

Israeli Prime Minister Benjamin Netanyahu has warned, “Iran is going to receive a sure path to nuclear weapons.” And Saudi diplomats have already told the Washington Post that the deal green-lights initiating their own nuclear weapons program.

Yet, if Congress is still intent on stopping a nuclear arms race in the Middle East — and any wars that may result from that madness — what are their options?

Without 150 House Democrats, members know right off the bat it will be impossible under the Corker law to override the President’s veto of a resolution of disapproval of the deal.

Treat the deal, now public, as a treaty.

When it is brought to the floor under the procedure provided for in H.R. 1191, a senator can raise a constitutional point of order that the Iran nuclear deal is being brought up in violation of Article II, Section 2 of the Constitution, which requires that treaties only be ratified by a two-thirds majority of senators present.

It would take a simple majority to sustain the point of order.

The Senate could then vote to consider the nuke deal as a treaty, in which case, under Senate rules, it would be referred to the Foreign Relations Committee. The committee could next refer it to the Senate floor, favorably, unfavorably, or without recommendation. Or do nothing, in which case it would remain in front of the committee indefinitely.

In this case, we’d recommend sending it to the Senate floor. At that point, the Senate could then defeat the treaty under the proper procedure.

Obama might then say he still has the authority still under H.R. 1191 and other statutes to lift the sanctions, in spite of the Senate’s rejection of the treaty, and attempt to proceed with the deal. The Senate could respond by going directly to the Supreme Court for an injunction against any administration actions to implement the deal.

In the meantime, both houses of Congress could deny the use of funds by the Obama administration to lift the sanctions.

There will be those who object to such a maneuver.

For example, Senator John McCain (R-Ariz.), in an interview with the Daily Caller, was emphatic, saying, “It’s not a treaty, though. That’s the problem. They’re calling it an agreement. If it were a treaty, then it would require two-thirds vote of the Senate in a positive fashion… [But] [n]ot when the administration doesn’t call it a treaty — okay? They’re the ones that label it. It is not a treaty. We can’t designate it. They have the ability to call it an agreement. We do not. Those are the facts.”

Isn’t that a neat, new executive power nobody ever knew about?

That means any president can subvert the treaty clause of the U.S. Constitution by simply pretending a legally binding agreement — and, oh, yes, the Iran nuclear deal puts all sorts of legal obligations on the U.S. such as lifting the sanctions, repealing certain executive orders, etc. — entered into with a foreign power is somehow “not a treaty.”

That is a horrible precedent to set, where not only the treaty clause of the Constitution is shredded for all time — on semantics no less — but the worst terrorist regime in history may get nuclear weapons, touching off a nuclear arms race in the most violent region in the world.

So, with all due respect to Sen. McCain and other members of Congress who voted in favor of the Corker bill, it is time to reconsider our position.

If members agree, like McCain, that this deal guarantees a path for Iran to get nuclear weapons, touches off an arms race, and risks war, they are left with but one viable option to stop it.

Remember they lack the votes to override an Obama veto.

Meaning, the only way to possibly stop it is to consider the Iran nuclear deal as a treaty, and defeat it — before it is too late. As Sen. McCain is well aware, this issue is simply too important, and Iran is too dangerous, to leave it up to Obama to get the details of this bad deal right.

NetRightDaily.com is a project of Americans for Limited Government. The project, launched in August of 2008, offers a liberty-minded thought on the federal government as well as the threats that exist to individual liberty at all levels of government.