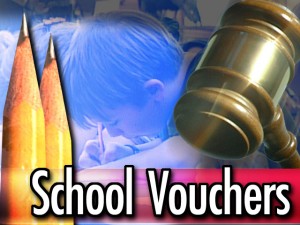 (NN&V Staff) – With a stroke of a pen, Wisconsin Gov. Scott Walker today signed a 2011-2012 state budget that dramatically expands the Milwaukee Parental Choice Program to include tens of thousands of working class and middle income families. His signature also means that a brand new school choice program will be established in Racine County.

The budget had previously passed the Senate and House on June 17 by votes of 19-14 and 60-38, respectively.

“This is incredible news that I know would make Milton and Rose Friedman smile,” said Robert C. Enlow, President and CEO of the Friedman Foundation for Educational Choice, the nation’s leading advocate for school choice. “The Friedmans understood the importance of the Milwaukee Parental Choice Program to the cause of educational freedom for all children, and they long hoped it would be expanded to include other cities. Today, thanks to the tremendous leadership of Gov. Walker and the state legislature, that hope is fulfilled.”

The Friedman Foundation for Educational Choice has long supported the expansion of the program. For more than a dozen years, the Foundation has undertaken research on the effectiveness of the Milwaukee Parental Choice Program and provided funding to support the local efforts spearheaded by School Choice Wisconsin.

“The expansion of school choice to Racine is a huge victory and we are grateful to the Friedman Foundation for Educational Choice Foundation for their support of our efforts there,” said Susan Mitchell, President of School Choice Wisconsin. “This is a game changer for Wisconsin — for the first time, parents outside Milwaukee will reap the benefits of educational choice.”

The Milwaukee Parental Choice Program will significantly increase the number of families and schools eligible to participate in the program. Specific changes include:

• A large increase in the family income qualifications. Previously, only children from families qualifying for the federal free and reduced price lunch program were eligible to participate. Now, children from all families earning up to 300 percent of the federal poverty guidelines, or $67,000 for a family of four, will qualify to receive a private school voucher.

• Removing the cap on the number of students who can participate. In prior years, there was a hard cap limiting the number of students who could receive a voucher to 22,500. This expansion eliminates the cap. It is estimated that, with the new income guidelines, 84,402 Milwaukee families — or 65.1 percent of all Milwaukee families — will be eligible to participate in the program.

• Once in, always in. In previous years, a student who received a voucher could lose eligibility for the program because his or her parents happened to increase their income in a given year. Now, once a student gets a voucher, that student will always be able to keep it, regardless of their family’s future income.

• A sizeable increase in the number of private school options. Previously, children receiving a voucher could only attend private schools in the city of Milwaukee. Now, they will be able to attend any participating private school in the state.

• Allowing parents to “top up” the voucher in high school. In previous years, high schools were required to accept the amount of the voucher, which is set at $6,442, as tuition in full. This meant that private high schools in the program were receiving barely half what traditional public schools receive to educate a child. Now, parents earning between 220 and 300 percent of the federal guidelines for poverty can add their own funds on top of the voucher, which will give them a wider array of options.

The budget also expands the choice program to the Racine Unified School District, which will operate exactly as the program in Milwaukee with the following exceptions:

• Expanded eligibility. Unlike Milwaukee’s program, the program in Racine will be open to any income-qualified child who attended Racine Unified Public Schools in the prior year or any current or entering student, public or private, in K-4, K-5, or K-1 kindergarten. Entering private school ninth graders will also be eligible.