‘The fate of the Senate majority will come down to this race.’ 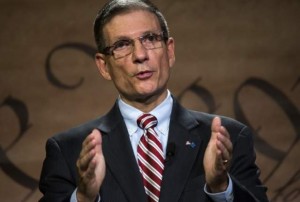 (Burgess Everett, Politico) – Joe Heck has the weight of the Republican Party on his shoulders.

It’s not a stretch, given his party’s poor prospects in other key states and the grim electoral map for Republicans, to say that the GOP congressman’s performance in the race for Harry Reid’s seat could decide which party controls the Senate next year. As if that’s not pressure enough, Heck will be up against the potential first Latina senator, Catherine Cortez Masto, in a state with a surging Latino population — with Donald Trump, who polls horribly with minorities, heading the ticket.

Then there’s Reid himself: The retiring minority leader is hellbent on keeping his seat in Democratic hands. He controls a vaunted turnout machine in the state and has already helped gin up some $12 million to ensure Heck loses.

“I’ve been under pressure before,” Heck said last week in his campaign headquarters in this tony Las Vegas suburb, recounting his overseas tour in Iraq as a brigadier general and work as an ER physician. But he acknowledges the magnitude of the task ahead: “There is no doubt that this seat will decide who holds the [Senate] majority in 2017.”

Nevada, possibly more than any other state, will test Democrats’ plans to deluge Republicans with an anti-Trump wave this fall. The state’s non-Hispanic white population has dwindled to 54 percent from about 79 percent in 1990, while the Latino and Asian populations have exploded. More than three-quarters of Latinos here are of Mexican origin, a segment of the population that Trump has repeatedly disparaged.