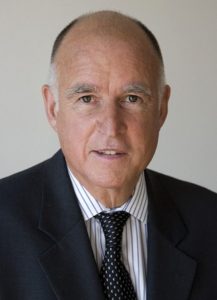 Gov. Jerry Brown is the current and the 39th Governor of California, serving a term since January 2011. He was also the 34th Governor of the state with his term in 1975-1983, taking the spot as the longest-serving governor in California. (Courtesy: Wikipedia)

(Lifezette) – California Gov. Jerry Brown joked Monday that if Republican front-runner Donald Trump wins the 2016 presidential election, the state will build a wall on its borders — not with Mexico but with U.S. states.

“If Trump were ever elected, we’d have to build a wall around California to defend ourselves from the rest of this country,” he said, according to the Sacramento Bee. “By the way, that is a joke,” he added. “We don’t like walls, we like bridges.”

Brown was lauding California’s economic progress and the influx of young and promising tech workers. However, the state has experienced net out-migration for decades, especially of middle-class families.