Joecks: Homosexuality is a sin, says pastor for Ford and Frierson

Joecks: Homosexuality is a sin, says pastor for Ford and Frierson
N&V Staff 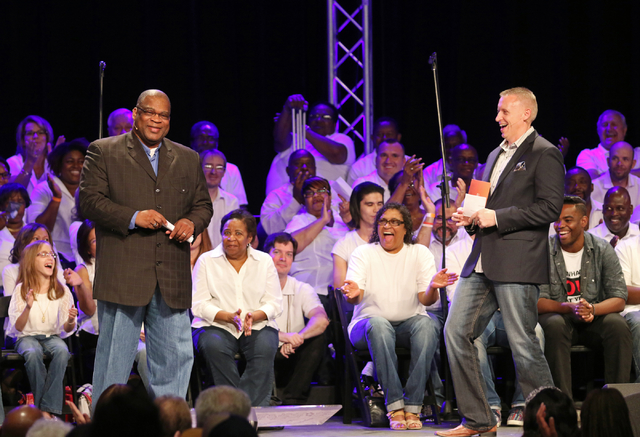 The Rev. Robert E. Fowler Sr., left, pastor of Victory Missionary Baptist Church, and the Rev. Vance Pitman, senior pastor of Hope Church, stand in from of members of their congregations who gathered at Hope Church on Monday, June 29, 2015, in a joint service to promote racial unity in response to the recent church shootings in Charleston, S.C. (Courtesy: Ronda Churchill/Las Vegas Review-Journal)

Victory Missionary Baptist Church is led by Rev. Robert E. Fowler Sr., and both Ford and Frierson attend services there. Just two months ago, Fowler even offered the opening prayer for both the Assembly and Senate on the first day of the Legislative Session.

Ford and Frierson are Nevada’s most powerful Democrat state-level elected officials. Their pastor’s position on homosexuality, however, is far outside the Democrat mainstream.

“We believe that everyone is to be restored to God,” said Fowler on KNPR’s State of Nevada in February 2013. “So whether you commit adultery, whether you commit fornication, whether you’re a child molester, you gossip, you lie, you cheat on your taxes, you don’t pay your tithes, things of that nature. All of that is wrapped together as sin, along with homosexuality. And so at our church, we don’t believe that there’s any one sin that’s greater than anything else.”