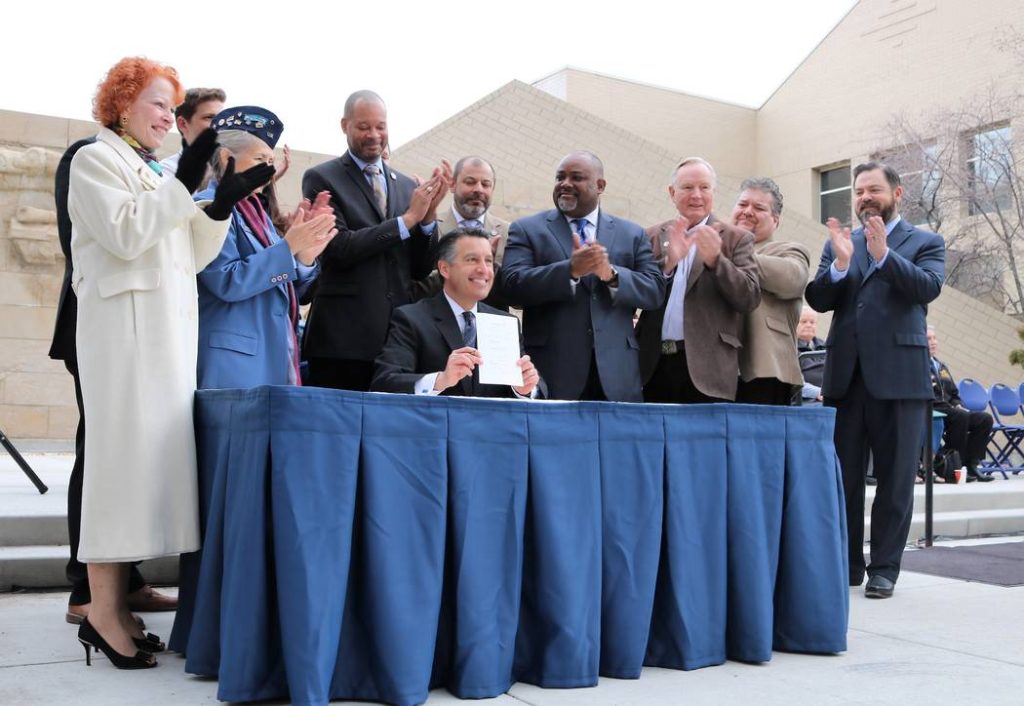 Legislators applaud as Gov. Brian Sandoval holds up SVB58 after signing it during a ceremony kicking off 2017 Veterans and Military Day at the Legislature, March 15, 2017. (Courtesy: Victor Joecks/Las Vegas Review-Journal)

(Victor Joecks, Las Vegas Review-Journal) – Nevada Sen. Dean Heller is in a no-win situation on the repeal and replacement of Obamacare, and his fellow Republican, Gov. Brian Sandoval, keeps putting him in the hot seat.

To understand Heller’s double bind, context on Obamacare is essential. President Donald Trump’s famed negotiating skills notwithstanding, it’s impossible to make everyone happy when it comes to repealing and replacing Obamacare. That’s because our country could never afford all the “free” stuff Obamacare promised.

Exhibit A is Medicaid expansion. Sandoval was the first Republican governor to embrace Obamacare by expanding Medicaid to those making more than the poverty line, including for the first time in Nevada, healthy, childless adults. Sandoval estimated that 68,000 newly eligible people would sign up.

He was off by a factor of four. Nevada’s Medicaid rolls have grown by 276,400 since expansion, with 266,000 being from the newly eligible population. This wasn’t impossible to predict, either. A prediction on Medicaid expansion from the Nevada Policy Research Institute, published while I worked there in 2011, was off by only 10 percent.

N&V StaffFebruary 15, 2022
Read More
Scroll for more
Tap
The shocking moment a thug in an Eeyore onesie body slams a guitar-wielding man on the Vegas Strip and knocks him out cold
PROOF: “Trash-Talking” Councilman is Misleading Public on Garbage Contract