Gorsuch Gets Boost From Democrats In Hearings

Gorsuch Gets Boost From Democrats In Hearings
N&V Staff 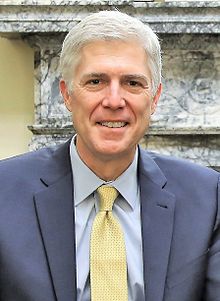 (Kevin Daley, The Daily Caller News Foundation) – Judge Neil Gorsuch’s nomination to the Supreme Court got a boost from two Democrats who testified before the Senate Committee on the Judiciary, as deep partisan entrenchment emerged during Monday’s hearings.

Bennet is under intense pressure from Colorado’s legal establishment to vote for his fellow home-stater. Though he stopped short of announcing his support for Gorsuch, he did reiterate his support for a full hearing and a vote on the nomination. Senators have often introduced judicial nominees from their home states, per chamber tradition.

“Out of respect for both Judge Garland and Judge Garland’s service, integrity, and commitment to the rule of law, I suggest we fulfill our responsibility to this nominee and to the country by considering his nomination in the manner his predecessor deserved but was denied,” the senator said.

He also praised Gorsuch’s “distinguished record of public service, private practice, and outstanding integrity and intellect,” adding that he had won the respect of the Colorado state bar.

Nearly a dozen Senate Democrats have urged a full hearing and a floor vote on Gorsuch’s nomination, almost guaranteeing he will survive a Democratic filibuster.

Katyal has argued 32 cases before the Supreme Court, as acting-solicitor general and from his perch at the appeals practice at Hogan Lovells. He told the committee he was confident Gorsuch would uphold the rule of the law on the high court.

The solicitor general represents the United States in litigation before the Supreme Court.

“Judge Gorsuch and I come from different sides of the political spectrum,” he said. “We disagree about many things. But we agree on the important things — that all people are equal before the law and that a judge’s duty is to uphold the law and uphold these principles and the Constitution above all.”

“The judge has done that during his time on the bench and I know he will continue to do so as a justice on the Supreme Court,” he added.

He also invented a new word to describe the judge — “hum-ability” — given his modesty and intellectual prowess.