The first part of our two-column series on President Calvin Coolidge reviewed his early career, culminating in his service as Massachusetts governor.  Today, his time as vice president and 30th president. 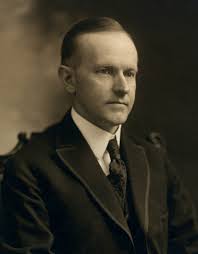 In 1920, Coolidge was a favorite son candidate for president from Massachusetts.  At that time, most states chose delegates to the Republican national convention at their state conventions.

At the 1920 Republican convention, ten ballots were required before the party nominee, Warren Harding, was chosen.  Coolidge, although popular for breaking the 1919 Boston police strike, could not gain any traction at the convention to be seriously considered as more than a favorite son.  He never finished higher than sixth on any of the ballots.

Harding had two choices ahead of Coolidge for his vice presidential nominee.  But he left the decision up to the convention floor after his first choice declined, and Coolidge was easily nominated for vice president on the first ballot.  Harding and Coolidge soundly defeated their Democrat opponents later that year.

Coolidge was the first vice president to be involved in Cabinet meetings.  He continued to enhance his reputation as “Silent Cal”, a man of few words not only during Cabinet meetings, but in social settings as well.

Upon Harding’s death in 1923, Coolidge became president.  The oath of office was administered by his father John Sr., a justice of the peace, at his family home in Vermont.  He returned to Washington the next day to resume working.

Coolidge’s reputation had remained greatly untarnished during the scandals of the Harding administration, but his nomination for president in 1924 was anything but assured when he took office.  Party leaders opined that he might be replaced on the ticket.

The turning point for Coolidge was probably his speech to Congress on December 6, 1923.  He gave a strong speech supporting many of Harding’s policies, including immigration restrictions and the budget process that was begun during Harding’s term.  He also benefited from this speech being the first one ever broadcast on radio, providing him with an audience that could hear him speak directly without the filter of the press.  Coolidge was a solid orator and played well on the new communications medium.

After that speech, he won the Republican nomination on the first ballot.  Former General Charles Dawes, the architect of the Dawes Plan to help financially stabilize Germany after World War I, was nominated as his vice president.  The Coolidge/Dawes ticket easily won the 1924 election.

During the Coolidge administration, the country experienced booming economic growth.  He disdained federal regulation, and did little to interfere with the economy.

He believed items that he championed as a state governor, such as wage and hour legislation and child labor laws, were best left to the states as the Tenth Amendment of the Constitution dictated.  He worked with treasury secretary Andrew Mellon on reducing taxes and paying off debts accumulated during World War I.

Coolidge tended to not comment on controversial subjects.  During the 1924 presidential race, his running mate and opponents highly criticized the Ku Klux Klan, which nearly hijacked the Democrat convention in an exercise known as the “Klanbake”.  Coolidge remained silent on the issue.  He did, however, make a strong statement on civil rights in his first State of the Union address, and supported making lynching a federal crime.

On foreign policy, he was the first and, until President Obama in 2016, the only president to ever visit Cuba.  He did so to pacify Latin American leaders over U.S. policies of intervention in the region.  Although American occupation of Haiti and Nicaragua continued during his presidency, he did withdraw from the Dominican Republic as part of this pacification.

During a vacation in the Black Hills of South Dakota, Coolidge issued a statement to the press saying simply, as only “Silent Cal” could, “I do not choose to run for President in 1928.”  And he didn’t, retiring back to Northampton, Massachusetts and his new home on the Connecticut River after leaving the office.

Coolidge died suddenly in 1933.  Poet and critic Dorothy Parker, upon learning of the death, quipped, “How could they tell?”

She obviously was more attuned to noise than profound impact.  Silent Cal was the opposite.

N&V StaffFebruary 15, 2022
Read More
Scroll for more
Tap
Being Barbara Cegavske: Clowns to Left, Jokers to the Right
Parents Are the Solution to Almost Every Problem…If They’re There