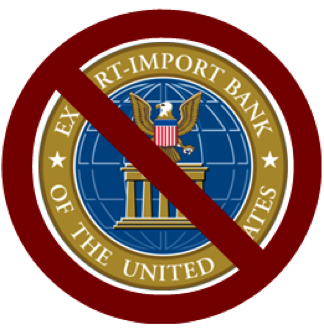 (Robert Romano of NetRightDaily.com) – Today, the charter of the Export-Import Bank of the United States expires.

It has been called the unnecessary bank, namely, because it only accounts for $27.5 billion of the nation’s $2.344 trillion of annual exports — just 1.17 percent of the total. While some companies do utilize it, such as Boeing and Caterpillar, almost all — more than 98 percent — of U.S. exports have no ties to the Ex-Im Bank.

It is also called the unsinkable bank, owing to its more than 80-year existence, which has always been reauthorized periodically in some iteration since 1934.

So, what will happen now that June 30 has come without congressional action?

In the bank’s sunset clause, it states, “The provisions of this section shall not be construed as preventing the bank… from continuing as a corporate agency of the United States and exercising any of its functions subsequent to such date for purposes of orderly liquidation, including the administration of its assets and the collection of any obligations held by the bank.”

Meaning, said Americans for Limited Government President Rick Manning, “A lapse of authority will simply mean the bank’s operations continue until all existing obligations are settled. It will continue collecting interest payments to maintain those operations.”

As the Congressional Research Service notes in a March 2015 publication, the bank has a contingency plan for just this happenstance: “[A]ccording to Ex-Im Bank, if its authority were to lapse, no new commitments (including new loan, guarantee, or insurance transactions) could be approved by its Board of Directors or under delegated authority, but prior obligations (including disbursements on already-approved final commitments) could continue. The Bank could continue to make expenditures in its operations (including salary, rent, etc.), while developing a plan for orderly liquidation.”

So, a lapse of the charter will not be the end of the world for honoring the bank’s existing obligations.

And undoubtedly, current bank customers could, over time, secure financing elsewhere in an increasingly credit-driven global economy. Corporate financing is nothing new.

Yet, to hear those corporations that benefit from the slightly lower interest rates the bank offers tell the story, you might conclude that Ex-Im was the only bank in town.

“In the case of Boeing, inaction by Congress to reauthorize Ex-Im makes it harder for Boeing to compete with Airbus and other emerging competitors with access to multiple export credit agencies,” said Boeing spokeswoman Gayla Keller in a statement quoted by the Daily Signal’s Melissa Quinn.

Certainly, there is some public uncertainty about where companies like Boeing and Caterpillar might obtain financing in the future, but it is beyond belief that they, like the agency, do not have contingency plans prepped in the event the charter lapses.

The best part of the charter expiring? Congress need only do nothing and we all get to find out just how dependent these companies really are on the bank. Members of Congress should pay attention closely, to match these companies’ dire warnings with reality.

When nothing bad happens — that is, unless Congress hits the panic button and reauthorizes the bank in the upcoming highway bill — this could become a teachable moment that there are functions the government performs that could easily be served by the private sector.

It is an insult to taxpayers for members of Congress or anyone else to go on pretending that in the 21st Century there is no alternative to an archaic government-run bank from the New Deal for U.S. exporters to obtain financing from. What about the bond market? Just how naïve do they think we are?

A version of this column was originally published on NetRightDaily.com, a project of Americans for Limited Government. NetRightDaily.com, launched in August of 2008, offers liberty-minded thought on the federal government as well as the threats that exist to individual liberty at all levels of government.

N&V StaffSeptember 29, 2022
Read More
Scroll for more
Tap
The IRS should back off changing gaming rules
No Independence Day for Small Business