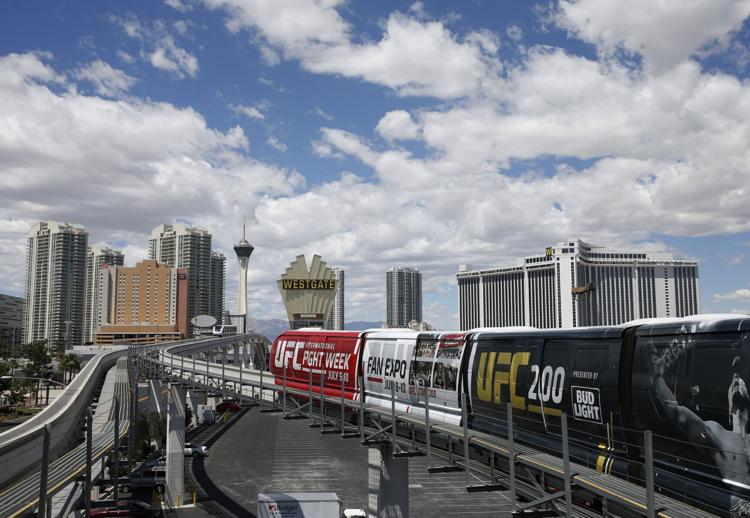 In this May 18, 2016, file photo, The Las Vegas monorail leaves a station in Las Vegas. The idled Las Vegas Monorail is being bought by the local tourism authority with plans to arrange the system’s second Chapter 11 bankruptcy after 16 years of operation by a not-for-profit corporation.
AP Photo/John Locher, File

(Michael McGrady) – The Las Vegas Monorail Co. filed for bankruptcy this week amid the damage done by the COVID-19 pandemic.

President and CEO Curtis Myles said that the decision to file Chapter 11 bankruptcy is in the company’s “best interest,” according to the Las Vegas Review-Journal.

“As a result, it is in the Las Vegas Monorail Company’s best interest to file for bankruptcy and effectuate a sale of the system assets to a party who intends to keep the system in operation and help ensure that the mobility benefits the Monorail provides continue during conventions, events and throughout the year,” Myles said on Monday, the Review-Journal reported.

The company is a not-for-profit, privately held company that offers alternative monorail transportation options for tourists and workers on the Las Vegas Strip. Key terminals run between some of the most popular hotels on the strip.

Due to the ongoing COVID-19 pandemic, the entire state of Nevada—like much of the United States—shut down most segments of the economy. Las Vegas and the outlying communities were hit particularly hard by the mandatory closures. The monorail system has seen a noticeable decline in passenger traffic after hotels were closed.

The monorail operator previously filed for bankruptcy in 2010 after ridership expectations fell short.

Earlier this month, the Las Vegas Convention and Visitors Authority Board of Directors approved a $24.26 million acquisition deal for the monorail operator.