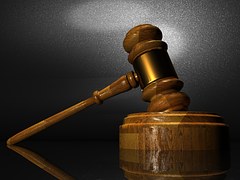 Well, the “Powers”-that-be are hopping mad about it!

Jacob Hafter, the attorney representing the young constituent who filed the suit, received a very threatening voice-mail today from Kevin Powers, the attorney from the Legislative Council Bureau (LCB) who represents sitting legislators such as Nelson.

In the voicemail, Powers advises Hafter to withdraw the “baseless” lawsuit and threatens to “aggressively” seek sanctions against him AND his client if they don’t back down.

Threatening a citizen for filing a lawsuit questioning his representative’s legal ability to serve in office?  What are these people so afraid of?  And where do they get off using taxpayer dollars to pay a government lawyer to issue such threats against a Nevada citizen?

Click below to listen to Powers’ shocking barrage of threats yourself…