Ling Up to Old Tricks in New Juice Job Controversy 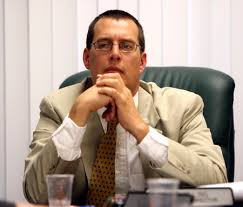 (Chuck Muth) – Does the name Louis Ling ring a bell?

Back in 2009 Ling resigned as executive director of the State Board of Medical Examiners.  According to a Las Vegas Sun story at the time, the controversy surrounded a regulatory decision by the Board to give medical assistants the authority to give people flu shots and other vaccinations but not Botox injections.

The Board was sued over the decision, and Judge Kathleen Delaney ultimately ruled that the board, under Ling’s management, had violated the Open Meeting Law and “probably exceeded its authority in adopting the regulation.”

Ling also came under criticism as a former deputy attorney general and legal counsel to the state Ethics Commission a decade earlier for failure to disclose alleged conflicts of interest.  But people who make their living off taxpayers rarely go away.  They just go elsewhere to dine at the government trough.

In Ling’s case he’s currently pulling down, I hear, some $600+ per hour – considerably more than Bernie Sanders’ proposed minimum wage – as outside legal counsel for the state’s Optometry Board.

That board recently lost its executive director with the death of Judi Kennedy, which has created an employment vacancy that I’m sure lots of Nevadans might be interested in.  If they knew about it, that is.

But instead of posting the job opening publicly and inviting a wide array of potential applicants – or even ridiculously posting the job on Craigslist, as Gov. Sandoval did earlier this year to fill a vacancy at the top of the Department of Education – Ling, I hear, is attempting to “juice” a crony of his into the job at a secret board meeting scheduled for the end of this month.

What I’m hearing is that Ling is pushing the board to hire a career government bureaucrat named Conrad Frederickson.  To that end, they’ve scheduled a special meeting for April 27 at 6:00 pm for board members to interview Mr. Frederickson even though the job hasn’t been advertised to the public and the meeting is being held at a private, undisclosed location in Las Vegas in apparent violation of the Open Meeting Law.

It’s déjà vu all over again!

As I understand it, Ling hopes Frederickson performs so well in the interview that the board will offer him the position on the spot without advertising the job to the public and going through all the trouble of, you know, interviewing others who aren’t Ling cronies.

The whole thing stinks on ice.

If the board goes through with this behind-closed-doors cloak-and-dagger grease job for this vacancy, the whole lot of ‘em – including Ling, who surely should know better from past experience – ought to be brought up on charges by the attorney general.  So let it be written; so let it be done.