LVRJ: Assembly GOP caucus members turn on each other 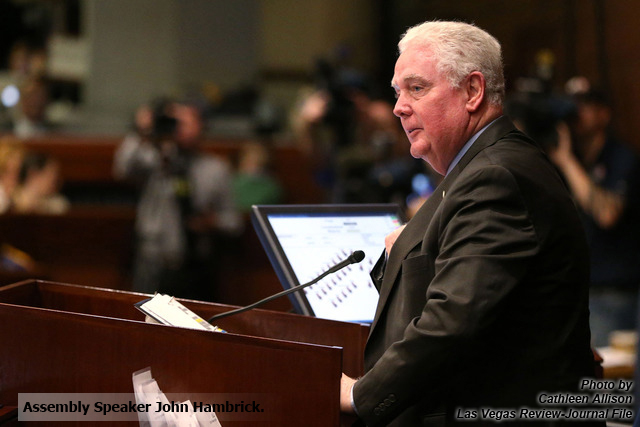 (Sean Whaley of Las Vegas Review Journal) – A flare-up between two members of the Assembly Republican Caucus in a private meeting last week has been downplayed by GOP leadership, but one of those involved, Assemblywoman Victoria Seaman of Las Vegas, is not happy with the response.

She has demanded a public apology from Judiciary Chairman Ira Hansen, R-Sparks.

Speaker John Hambrick, R-Las Vegas, said in his statement that the dispute between Seaman and Hansen is being resolved internally.

“While Assembly Republican Leadership normally does not publicly comment on what takes place in caucus meetings, we make the rare exception now,” Hambrick said in a statement. “Neither we nor any members of our caucus condone threatening language — intended or otherwise — at any time or in any place.”

Hambrick blamed the exchange on the workload, stress and time pressures of the session.

Seaman said Hansen’s decision to kill her Assembly Bill 282 dealing with reforms to the Homeowner’s Bill of Rights was purely personal. The bill did not get out of the Judiciary Committee by an April 10 deadline.

“During the course of a testy exchange, Chairman Hansen remarked that if I was a man he’d punch me in the face,” she said. “Of course, if he was a man he would have already apologized for the inappropriate use of such threatening language. He hasn’t.

“Blaming Chairman Hansen’s actions on ‘workload, stress and time pressure,’ as well as ‘physical and emotional strain,’ is inaccurate,” Seaman said. “This was the culmination of a pattern of autocratic committee management throughout this session and a demonstration of power to show me ‘who’s the boss.’

“Frankly, nothing short of a public apology from Chairman Hansen for using such threatening and inappropriate language is acceptable,” she said. “And under the circumstances I ask our caucus leaders to right this wrong by finding a way to bring my bill to the floor of the Assembly for consideration. Then we can put this matter behind us and ‘continue to work together to pass good law.’ ”

Hansen responded Saturday to Seaman’s statement, saying that in private meetings she has spoken out of turn, talked on her cell phone, belittled those with different views and on at least three occasions, “stomped out of meetings when not getting her way.”

Hansen said Seaman opted to have her bill die rather than accept what he called a simple amendment.

“I will as chairman of the Judiciary Committee maintain order and decorum,” he said. “I will protect the rights of others to express divergent opinions using common courtesy and ensure they have an equal opportunity to do so. I will not reward obnoxious behavior, and I will amend into future bills the best ideas of bills that did not clear my committee.”