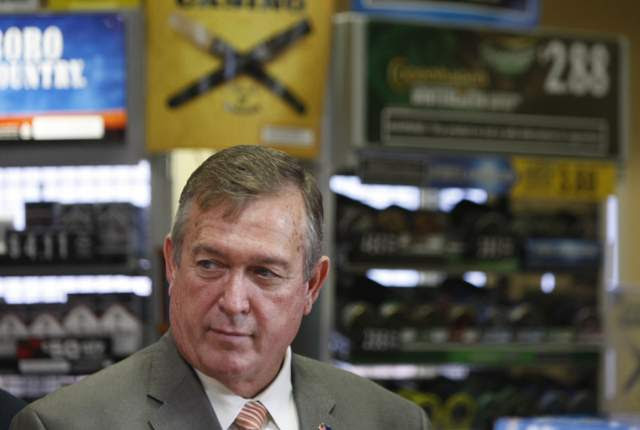 (Steve Tetreault, Las Vegas Review-Journal) – The stage has been set for a new debate over the Gipper and whether there should be a natural monument to him in Nevada.

Rep. Cresent Hardy, R-Nev., on May 13 reintroduced a bill that would name one of the peaks of Frenchman Mountain to the east of Las Vegas for President Ronald Reagan. The peak would become known as Mount Reagan.

“Congressman Hardy appreciates much of what Reagan stood for and thought it appropriate to recognize the former president’s ideals in this way,” his spokesman said.

Last year a similar bill passed the Republican-controlled House Natural Resources Committee but stalled after it became a partisan issue that divided Nevada’s delegation. Its chief advocate, Las Vegas conservative activist Chuck Muth, is hoping for a different result now that both sides of Congress have GOP majorities.

Muth is looking to fulfill Nevada’s part of the Ronald Reagan Legacy Project, which seeks to name at least one public landmark in each state and all 3,067 counties after Reagan. Perhaps the best-known renamed landmark is Ronald Reagan Washington National Airport in the nation’s capital. There is also the Ronald Reagan Turnpike in Florida.

At various times there have been proposals to put Reagan on the $10 bill, the $20 bill, even to rename the Pentagon the Ronald Reagan National Defense Building.

An archive at the University of Texas counts at least 134 places or things in 30 states named in honor of Reagan, none in Nevada. More than 600 places or things have been named after President John F. Kennedy and more than 800 after civil rights leader Martin Luther King Jr., according to a CBS/Associated Press story from a decade ago.

The Ronald Reagan Legacy Project was formed by Americans for Tax Reform and its anti-tax leader Grover Norquist. The 40th president is regarded as a conservative icon, but those who disagreed with his politics and policies hold equally strong views.

But in a bit of political intrigue, Democratic Rep. Dina Titus of Las Vegas headed him off. She introduced legislation naming the same peak after Maude Frazier, a Democrat and the first woman to serve as Nevada lieutenant governor.

The U.S. geography board protocol is to steer clear of naming bills pending before Congress, so Muth was blocked. He got Rep. Joe Heck, R-Nev., to submit a bill putting Reagan’s name on an adjoining peak to the north that is 100 feet shorter.

Titus reclaimed the highest peak in a “Maude Frazier Mountain” bill she reintroduced in March. Hardy’s bill is identical to the Heck effort from last year. There has been no action set yet on either bill.

“So we’ll just stick with the mountain,” Muth said. “We’re just following (Hardy’s) lead on this. Hopefully we’ll be able to make this happen.”