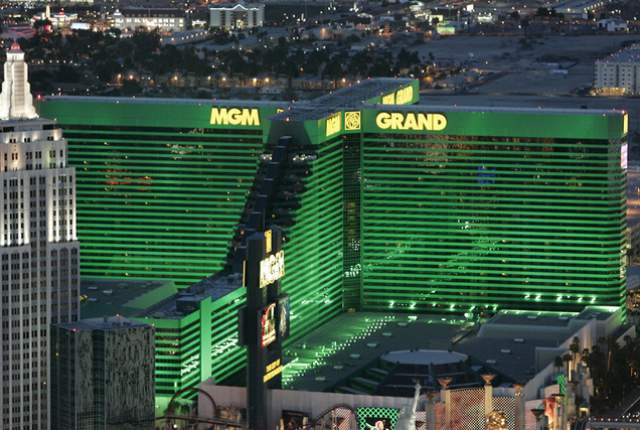 Exterior of the MGM Grand hotel-casino is shown from the M Resort Blimp on Wednesday, March 18, 2009. (Photo by Duane Prokop, Las Vegas Review-Journal)

(Sean Whaley, Las Vegas Review-Journal Capital Bureau) – CARSON CITY — A witness for MGM Resorts International is highly critical of Nevada Power Co. in testimony filed with the state Public Utilities Commission, saying that the gaming company intends to proceed with its application to leave the utility as a retail customer despite the potential of having to pay an “exit fee” of as much as $90 million.

Testimony was submitted Tuesday on behalf of MGM by Mark Garrett, president of a company specializing in public utility regulation. In that testimony, Garrett described Nevada Power, a subsidiary of NV Energy serving Southern Nevada, as “tone deaf to the current and ongoing economic recession.”

Instead of filing applications to reduce its rates to eliminate its over-earnings and to bring its prices in line with market-based prices in the region, Nevada Power has continued to seek further increases even when they are clearly not in the public interest and are detrimental to the Nevada economy, he said.