Man breaks up armed robbery attempt outside east side bank 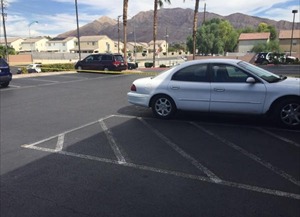 Crime scene tape at a parking lot near a Wells Fargo bank in the 5800 block of East Charleston on Saturday, Sept. 26, 2015. (Photo by Chuck Muth)

(Marvin Clemons, KSNV News3LV) – A woman was grazed in the arm during an armed robbery attempt outside of a bank on the east side of the valley Saturday afternoon.

Metro Lt. Jeff Goodwin said the call came in at 12:30 p.m. Saturday in the 5800 block of East Charleston Boulevard.

“Somebody was shot during a robbery attempt in a parking lot and they went into a Wells Fargo bank to get help,” Goodwin told News 3.

Chuck Muth, a conservative political activist, was arriving at the bank and broke up the attempted robbery, according to his tweets, adding that the man had the woman on the ground and was attempting to steal her purse.

He said he followed the man into a housing complex but lost him. He was to be questioned by Metro, he tweeted.

The article was originally published in KSNV News3LV.