From Personal Experience: A Good Guy without a Gun is Pretty Much Useless!

From Personal Experience: A Good Guy without a Gun is Pretty Much Useless!
N&V Staff

And after yesterday’s experience, I’m now gonna be an even bigger one of both.

Many of you probably already know part of the story from reading my Twitter posts during the incident, or reading the Channel 3 (“Man breaks up armed robbery attempt outside east side bank”) story I emailed out, or caught my interview on Channel 13 last night (though they misspelled my last name as “Hath”).

The day started out GREAT.

My son, CJ, woke up early and the two of us took the dogs for a long walk out in the desert at the base of “Mount Reagan.”

I really love these occasional early walks with my boy.  They remind me of that opening scene on the Andy Griffith show with Sheriff Taylor and Opie walking down a path together, fishing rods on their shoulders, heading for the pond.

It also always reminds me of the “People let me tell you ‘bout my best friend…” song from the Courtship of Eddie’s Father show.

Back to the story…

Yesterday was also Opening Day of the fall soccer season for the U-15 co-ed team I coach – which is generously sponsored by an absolutely wonderful man and great Nevadan, Bobby Ellis of SNAP Towing.

The great thing about Mr. Ellis’ sponsorship is that the league is able to place kids on my team, the Sharks, whose families otherwise wouldn’t be able to afford the registration fee.

We’re also willing to take kids who have never played before, since my overall coaching philosophy is that in a “rec league” it’s more important that all the kids get sufficient playing time and have fun more than winning.

I also like getting kids who have never played before because they have no idea that I have no idea how to coach soccer.

Now, that doesn’t mean I/we don’t like winning.  We play our hardest to win.

And yesterday we won our opening game – with 5 new players; 2 who have never played – by the score of 3 to 1.  So we’re in first place!  Tied with three other teams for first place, to be sure, but heck, we’ve never been in first place before.  Woo-hoo!

Anyway, after the game I dropped off Gia and the kids at the house and then headed to my U.S. Bank branch to open up a checking account for our new Ax the Tax PAC that will fight to repeal RINO Gov. Brian Sandoval’s $1.4 billion tax hike.

Since I’ve been a longtime customer with U.S. Bank for my business and had already confirmed that the PAC registration was showing on the SoS’ website, I didn’t expect any problems with opening an account.

Alas, for some unexplained reason the bank manager informed me that unless I went through the time, aggravation and expense of incorporating the PAC they wouldn’t open an account.

Well, if that’s their policy, fine.  It’s their bank.  Then again, it’s my money. So I’ll be changing banks.

Which is why I was heading to the Wells Fargo bank in the Albertson’s shopping center at East Charleston and Sloan around 12:30 pm yesterday afternoon.

My UPS Store mailbox and dry cleaner are already in that shopping center. Plus I really like Wells Fargo’s regional bank president here, Kirk Clausen. So it seemed like a good and convenient idea. 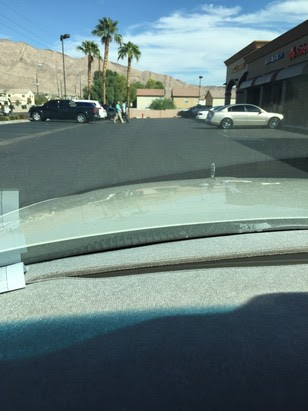 As I pulled into the parking lot I noticed up ahead (about where the two police detectives are standing in the photo to the right) a man and a woman in some kind of physical confrontation.  I assumed it was some kind of domestic dispute.

As I came closer, I watched the man throw the woman to the ground.  So instead of pulling into a parking space, I pulled right up next to the pair.  She was on her back and he was wailing on her.  I wound down my window and shouted at the guy to lay off.

I was just about to open my car door when I saw him pull out a handgun, fired one shot at the defenseless woman on the ground, and then take off running down the street.

At this point, I still thought it was a domestic dispute.  It was only later that I learned the dirtbag was trying to steal her purse.

I gotta be honest; I did give a moment’s pause.  This dirtbag was armed and I wasn’t.

And yes, I immediately thought about my wife and kids.  But I didn’t plan to try to apprehend the guy.  I planned to stay a safe enough distance away, but follow him as long as possible while calling in his whereabouts to 9-1-1.

I started to pull away but then decided the first priority should be to check on the woman who had just been shot.

I stopped the car before exiting the parking lot, got out and saw that she was standing.  I asked if she was OK, and she said she thought so. Fortunately, she had only been grazed in the shoulder.

So I headed out of the parking lot and tried to find the POS who had shot and robbed her.  But he apparently ran into the housing complex next to the shopping center and disappeared.

I called it into 9-1-1, told the dispatcher what had just happened, and returned to the bank parking lot.

The injured woman wasn’t there when I got back, but someone told me she had gone into the bank – which had locked the doors until Metro arrived.

And arrive they did!  Police cars and uniformed officers everywhere.  At least a couple dozen.  They roped off the crime scene and surrounded the housing development.  But too late.  The dirtbag was gone.

An ambulance arrived, treated the woman’s wound and took her to the hospital.

I saw her later in the day – her name is Holly – after she returned from the hospital.  She thanked me for stopping and helping her.  Said she didn’t know what the guy would have done to her if I hadn’t rolled up on him.

Anyway, detectives arrived on scene a little while later and asked me to stick around so I could give them a full witness statement after they completed their investigation.  All told everything was wrapped up in less than two hours.  Total pros, every one of those who responded.

Sheriff Lombardo has much to be proud of.

Lesson One: A dirtbag willing to shoot a defenseless woman for her purse isn’t going to give a sh*t if there’s a law on the books banning the possession of a firearm.

Lesson Two: If a dirtbag who is willing to shoot a defenseless woman for her purse wants to obtain a firearm, he’ll get one – no matter how many criminal background checks are required of law-abiding citizens.

Lesson Three: First responders are great, but they can’t be everywhere at once.

The fact is there was no police around at the time this guy assaulted this defenseless woman in the Wells Fargo parking lot.  She was a sitting duck.

Frankly, so was I.

I had only the safety of being inside my vehicle at the time.  Had the guy turned his gun on me rather than turning and running, I’d have been a sitting duck, as well.

In that regard, yeah…what I did was monumentally stupid.

Things could have turned out much worse.  A lot of these kinds of incidents do.

But I couldn’t just stand there and watch this guy beat the hell out of that woman.

Blame my parents for bad upbringing.

The truth of the matter is this…

And while first responders are great, they’re not as great as immediate responders.

And as much as we like to think that something like this happens to someone else; that it will never happen to us – that’s living in denial.

I’ve been living in such denial for 56 years.

Tomorrow, Gia and I are going to do what’s necessary to make sure neither of us is ever in a similar defenseless situation again.

P.S.  I took Front Site’s 2-day defensive handgun course out in Pahrump a few years ago.

It was my first and only time using a weapon.

I need to go back for a refresher.

And take Gia with me this time.

If only we can find an armed babysitter for the two days!