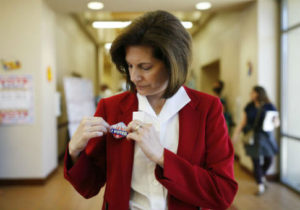 Masto told reporters at a campaign event that she opposes the law, which creates Education Savings Accounts, which allows families to use public education funds to send their children to private or parochial schools.

The announcement came after the political action committees of the National Education Association and the American Federation of Teachers each donated $10,000 to Masto’s campaign, the maximum legal amount.

Teachers unions vehemently oppose school choice, as it redirects tax dollars to schools whose teachers are less likely to be unionized.

The Republican-controlled Legislature voted on party lines last year to authorize the program, which allows parents to tap public education funds to use for private school tuition. Two lawsuits have challenged the constitutionality of the program, which is on hold and under review by the Nevada Supreme Court.

Cortez Masto says the program takes money away from public schools. Asked about how to help children stuck in low-performing schools, she said she supports investments like the tax package backed by Republican Gov. Brian Sandoval and approved last year.

Sandoval is a major supporter of the Education Savings Accounts. “I strongly support school choice,” he said in a statement last year. Lawsuits holding up the program “potentially deprive parents of the opportunity to determine the educational future of their children.”

As of [2016], parents in Nevada can have 90 percent (100 percent for children with special needs and children from low-income families) of the funds that would have been spent on their child in their public school deposited into a restricted-use spending account. That amounts to between $5,100 and $5,700 annually, according to the Friedman Foundation for Educational Choice. Those funds are deposited quarterly onto a debit card, which parents can use to pay for a variety of education-related services and products — things such as private-school tuition, online learning, special-education services and therapies, books, tutors, and dual-enrollment college courses. It’s an à la carte education, and the menu of options will be as hearty as the supply-side response — which, as it is whenever markets replace monopolies, is likely to be robust.

Notably, families can roll over unused funds from year to year, a feature that makes this approach particularly attractive. It is the only choice model to date that puts downward pressure on prices. Parents consider not only the quality of education service they receive, but the cost, since they can save unused funds for future education expenses.

Lachlan Markay   Email | Full Bio | RSS
Lachlan Markay is a staff writer for the Washington Free Beacon. He comes to the Beacon from the Heritage Foundation, where he was the conservative think tank’s first investigative reporter. He graduated from Hamilton College in 2009, and currently lives in Washington, D.C. His Twitter handle is @lachlan. His email address is markay@freebeacon.com.