The GOP’s Best Hope for Picking Up a Senate Seat 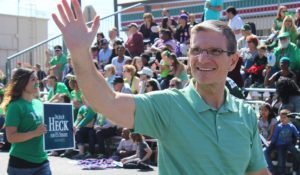 (IAN TUTTLE, NationalReview) On January 3, 2017, Harry Reid will officially retire from the United States Senate, bringing to an end 30 years of his unique brand of political skullduggery, which ranged from using the Senate floor to attack private citizens’ political speech to lying about Mitt Romney’s taxes (later justified on the grounds that “Romney didn’t win, did he?”). Dr. Joe Heck, the Republican candidate to replace him, promises to give Nevadans something different: “After eight years of Barack Obama and 30 years of Harry Reid, America and Nevada are ready for change — and I’m going to bring that change.”

Heck is in his third term as the congressman from Nevada’s third congressional district, where he has been less interested in rhetorical bombast than in finding solutions to niggling problems. He was instrumental in ending the Medicare Sustainable Growth Rate in 2015, which since 2002 had threatened Medicare doctors with automatic payment cuts and which Congress had regularly circumvented by means of short-term “doc fixes.” The Hill called ending the SGR “one of the biggest achievements for the new Republican Congress.” When the Supreme Court struck down the Stolen Valor Act of 2005 during its 2012 term, Heck sponsored a revised version of the bill that addressed the Court’s concerns; it was promptly signed into law. His results have been such that, in a district split 50–50 between Republicans and Democrats, he won his first reelection bid by seven points and his second by 25 points.

Heck’s areas of focus in the House reflects his résumé. Congressman is only his latest hat. He is a board-certified emergency-medicine physician who has practiced extensively in Nevada; he is a 25-year Army Reservist (rank: brigadier general) who served three tours of duty, including one in Iraq; and he is the former owner of a security-consulting firm that he steered through the economic downturn. Heck points out that most Nevadans share the same major concerns: national security, jobs and the economy, and health care. And he notes, “I have real-world experience in each of those areas.”

In conversation about policy, it shows. On topic after topic, he can rattle off proposals and is happy to get into the weeds. He’s not “wonky”; he just knows his stuff.

Both his time in and out of Congress is put to good use — for example, on health care. “Do you want to know what works and what doesn’t work in health care? Go to an inner-city hospital emergency department. I like to say that if, back in 2010, more physicians than attorneys had been writing the health-care bill, things would have looked very different.” In his first term in the House, Heck sponsored a bill to repeal what he calls the “Un-Affordable Care Act,” and elements of his bill have been taken up by House leadership. He’s part of the 18-member GOP Doctors Caucus, where he tries to develop and push legislation that will increase “access to health care, not health insurance,” (the latter is the real outcome of Obamacare, he says). That’s a particularly urgent problem in Nevada, which ranks 47th in the nation in the ratio of doctors to patients. Among other remedies for his state, Heck would like to see increased medical-residency funding and, given Nevada’s changing demographics, an expanded effort to recruit Latino doctors.

Heck has joined his medical and military backgrounds in his work in behalf of veterans, who make up 8 percent of Nevada’s population. He succeeded in getting a permanent Veterans Affairs clinic opened in Laughlin, Nev., at the state’s southern tip, after learning that some veterans were forced to drive hours to reach a VA facility. Integral to helping veterans, says Heck, is the veterans’ advisory panel he set up and meets with quarterly. This is the sort of attention to constituents that Harry Reid never provided, he says, and that he promises he will if elected: “I will address the issues that are important to Nevadans.”

Not surprisingly, Heck’s opponent for Reid’s seat is Reid’s handpicked successor (though she needed no encouragement), former state attorney general Catherine Cortez Masto. It’s a fitting choice, given that Cortez Masto, too, is not above abusing her office for political ends. In 2009, she charged then-lieutenant governor Brian Krolicki, a Republican, with mishandling funds years before in his previous position as state treasurer. At the time the case was brought, Krolicki was considering a challenge to Harry Reid, which in all likelihood would have been formidable. The case was ultimately dismissed, but it was enough to keep Krolicki from pursuing the bid.

In 2014, when she was term-limited out of the attorney general’s position, Nevada’s Democratic establishment rewarded Cortez Masto for her loyalty. She was named executive vice chancellor of the Nevada System of Higher Education, at a handsome $215,000 a year, although the Board of Regents never voted on the hire, and it was “unclear” (in the words of the Las Vegas Review-Journal) whether they had even considered other candidates. Moreover, the position had not been filled for five years, and one regent said there was no indication that it needed to be.

But it was a comfortable perch to occupy while watching for Reid’s seat to come open, which Cortez Masto has long made clear was her desired position. (She declined the opportunity to run for governor in 2014.) Now the time has come, and Cortez Masto is depending on Reid’s network and infrastructure to buoy her bid.

As with other Democratic Senate candidates, she’s receiving help from the Republican presidential nominee, who has presented a foil. But she may be overplaying her hand. Last month, Cortez Masto said in a campaign news release that Heck and Trump were “ideological soul mates,” and that “just on the issue of immigration alone, it is next to impossible to find a policy difference between Trump and Congressman Heck.”

Given that Heck supports what he calls a “sequential, stepwise approach” to immigration reform that would ultimately include a pathway to some form of legal status (once the border is secured, e-Verify is implemented, etc.), this was patently false, and PolitiFact said so. But the effort continues. At an event for Hillary Clinton, Reid called Cortez Masto’s opponent “Joe ‘I’m Really Trump’ Heck.” Heck, for his part, says his focus is on Nevada. He has previously vowed to support the Republican nominee but says that as a senator he would “hold the president accountable,” whichever party he or she comes from.

Given this year’s Senate map, Nevada’s is the only seat Republicans have a realistic chance of picking up, and as of now, Heck and Cortez Masto are in a dead heat. But Heck is a promising prospect for this purple state: a smart, policy-oriented, moderate conservative with a long, impressive record of service. And if Nevadans are tired of Harry Reid’s Democratic machine, there would be no clearer rebuke than filling his seat with Nevada’s second Republican senator.

Ian Tuttle is the Thomas L. Rhodes Fellow at the National Review Institute.