Medicaid’s death tax on the poor

(Robert Romano for NetRightDaily.com) – Thinking about going on Medicaid?

That is how much the Medicaid program recovered from the estates of deceased patients in Fiscal Year 2011, according to a program inspector general report.

Asset seizure has long been a part of the Medicaid program since 1965, and since 1993, it has been used to help states recoup the cost of nursing home and other long-term care.

Yet, in 2011, the aforementioned year, nursing home programs cost Medicaid $47.5 billion, according to the Department of Health and Human Services. Meaning, less than 1 percent — 0.9 percent to be precise — of the program’s nursing home expenses were paid for by these estate recoveries intended for that purpose. 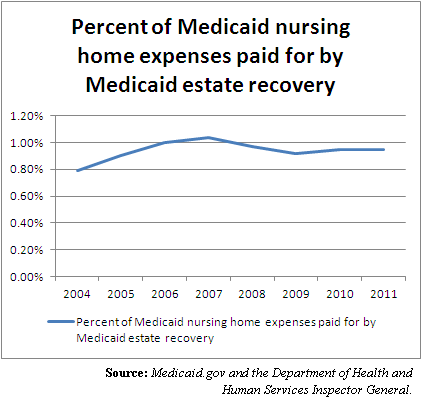 Since Medicaid is a means-tested program, what the asset seizures amount to is a punitive estate tax on the poor — for those who have hardly any estates at all.

In the meantime, in 2010, Congress did away with the actual estate tax for estates up to $5 million. So, comparatively wealthier Americans do not have to pay any estate tax at all; but, perversely, states are seizing poor people’s homes to “pay” for Medicaid.

For those looking to address the cycle of poverty of those eligible for these programs, why not just allow these elderly to pass on what little estates they have to relatives or friends?

It’s almost as if the government wants the poor — to stay poor.

Asset seizure has always been a part of the program since 1965, permitting states “to recover from the estates of deceased Medicaid recipients who were over age 65 when they received benefits and who had no surviving spouse, minor child, or adult disabled child,” according to a Department of Health and Human Services fact sheet.

In 1993 this was expanded as part of the Omnibus Budget Reconciliation Act of 1993.

According to the department, under the newer law, “States must pursue recovering costs for medical assistance consisting of nursing home or other long-term institutional services,” among other items. And, now the age of eligibility was 55, “or who, regardless of age, were permanently institutionalized.”

The 1993 House bill passed 218 to 216, with every one of the 175 Republicans voting no, and 41 Democrats also voting no. It passed the Democrat-controlled Senate as well along party lines, and was signed into law by then-President Bill Clinton.

And now that Medicaid has been expanded dramatically under the health care law — it currently applies to about 4.6 million elderly according to the department — the pool of people eligible to have their assets seized by the government is getting larger.

But that is not even the worst part.

They are not just seizing assets of the deceased; they are also seizing the assets of the living, a practice since 1982. According to the U.S. Code, a person’s home can be seized if the patient “cannot reasonably be expected to be discharged from the medical institution and to return home,” and there is no surviving spouse or child under the age of 21 living in the house.

So, if your wife is dead, and your kids are married and you go into a nursing home and Medicaid pays for it, the government will take your house. You can’t leave it to the kids.

How is that not an estate tax when the presumption is that those on Medicaid are too poor to afford their own health care and so must be on the program?

Keep in mind there is no payroll tax revenue dedicated to Medicaid. It is an unfunded liability through and through — except for the estate recoveries and liens.

Why, it appears potential patients would be better off selling all of their assets to their children prior to going on Medicaid and going into long-term care. Just saying.

Benefitting state agencies will likely claim this revenue is somehow essential to maintaining services, and yet it does almost nothing to pay for the program itself. This is a tax we could do without, especially since it simply perpetuates the cycle of poverty.

And to think, if Congress really had done a single-payer system, we’d all be on Medicaid now.