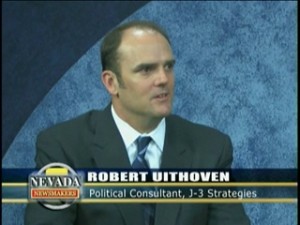 (Chuck Muth) – I’ve known Robert Uithoven – who’s running for Nevada GOP chairman this weekend at the party’s fall meeting in Las Vegas – professionally since around 2005, and he and I have worked together on a number of different issues, especially when I was living in Carson City.

Indeed, back in 2009 Robert royally pissed off then-Minority Leader Bill Raggio (R-Reno) when he single-handedly almost derailed the “temporary” tax hikes Raggio and other moderate Republicans were trying to pass over then-Gov. Jim Gibbons’ opposition.

“Desperate anti-tax forces, represented by Republican consultant Robert Uithoven, used rumors of potential conflicts of interest as a way to peel off ‘yes’ votes (for the tax hike),” Raggio biographer Michael Archer wrote in “A Man of His Word.”

They weren’t “potential conflicts.”  They were real.  And indeed, Raggio was forced to abstain from voting for the tax hikes until then-Senate Majority Leader Steven Horsford issued his infamous “Absolution Resolution” which allowed all senators to vote on the tax hike whether they were conflicted or not.

“He was very apologetic.  I really did not understand his posture, though he is very much influenced by [anti-tax political blogger] Chuck Muth.”

Of course, it’s not true.  Robert is and always has been his own man.  But I appreciate the compliment from Sen. Raggio.

Nevertheless, this quote from the late senate leader should remind everyone, especially Gov. Brian Sandoval, that it was absolutely the intent of the Legislature that those tax hikes go away!  Under NO CIRCUMSTANCE should Sandoval again include them in his 2015 budget if he wins re-election.

But back to Uithoven.  He contacted me on Tuesday with a request:

“Chuck – You know me well, but your readers may not.  I’m happy to have you ask me any questions and I’ll answer them to you over the phone – you can record and transcribe if you’d like – so your readers can know more about me and who I am … and who I am not.”

Robert knows that I’ve been a supporter of incumbent Chairman Michael McDonald, but his request was reasonable, and in the interest of fairness I agreed.  So on Wednesday morning we spent 73 minutes together on the phone talking about all manner of issues, concerns, controversies and strategies related to the GOP chairman’s race.

I shared that interview with Silver State Confidential subscribers last night, but thought this interview was important enough to make available to everyone before this important election.  It was recorded live and has no editing.  Ditto the transcription.  And I’ll not comment on any of it…and just let you, the listener/reader make up your own minds.