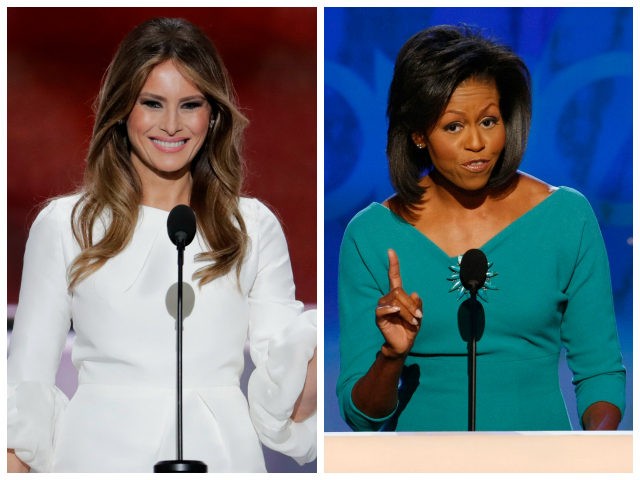 (Rebecca Mansour, Breitbart) Whether or not Melania Trump cribbed a passage from a Michelle Obama speech, there is one crucial sentiment Donald Trump’s Slovenian-born wife certainly didn’t copy from Obama’s — the inherent pride of being an American citizen.

As the media pours over one passage in Melania Trump’s Republican National Convention speech that is similar to Michelle Obama’s 2008 speech at the Democratic National Convention, they overlook a key sentence that was undeniably written by Mrs. Trump and reveals all the difference in the world between these two women and their husbands.

“On July 28th, 2006, I was very proud to become a citizen of the United States — the greatest privilege on planet Earth,” the smiling Mrs. Trump said to thunderous applause.

Speaking with the thick accent of a non-native speaker, she flubbed the word “citizen” for “citizens,” but everyone understood her meaning, and that endearing verbal quirk and the obvious pride with which she said those words was immediately recognizable to those of us who come from immigrant families. Click here to continue reading

N&V StaffOctober 4, 2022
Read More
Scroll for more
Tap
Marcus Luttrell Challenges Americans: “Who Among You will Love Something More than You Love Yourself?”
Duck Dynasty’s Willie Mocks ‘Media Experts’ Who Have Been ‘Humbled’ by Donald Trump