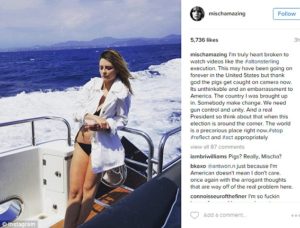 First, she was voted off Dancing with the Stars in the second week and now she’s an internet punchline for her reaction to the Alton Sterling shooting.

Hoping to express her solidarity with the Baton Rouge, Louisiana man’s family and apparently the Black Lives Matter movement at large, the 30-year-old actress posted a bizarre picture to Instagram Thursday afternoon – showing her looking downcast and drinking wine on a yacht.

In the caption, the British-born and American-raised actress wrote that she is ‘truly heart broken’ after watching the video of the 37-year-old man’s shooting. Click here to continue reading

N&V StaffMay 18, 2017
Read More
Scroll for more
Tap
Speed Up, Slowpoke, or Get a Ticket
Will Smith’s Son: I Wear Skirts to Combat Bullying