(Thomas Mitchell, 4TH ST8) – Nevada’s education savings account (ESA) law is in dire straits thanks to a convoluted state Supreme Court ruling that said ESAs are constitutional but the funding mechanism devised by lawmakers was not and the fact that this year’s roster of lawmakers, who could fix that funding flaw, includes a majority of Democrats in both the Assembly and state Senate. Not a single Democrat voted for the ESA law in 2015.

Disturbingly, the argument being foisted by the opponents of ESAs is a bald-faced lie.

The opponents posit that letting parents keep a small portion of their tax money to allow them to take their children out of public schools and spend that money on private schooling, tutoring or even home schooling reduces the funds to support public education. In reality, the exact opposite is the case. Per pupil funding would actually increase.

Under the law, parents who opt out of sending their children to public schools would be given an education savings account that would equal a portion of the statewide average the state spends per public school pupil, currently, that is about $5,700. Low-income parents and parents with special needs children would get 100 percent of that amount, while all others would get 90 percent, or about $5,100 currently.

Thus far, about 8,000 families have applied for ESAs.

This past month ESA opponents sent a letter to state Attorney General Adam Laxalt and state Treasurer Dan Schwartz demanding Schwartz stop accepting applications for ESAs while the law is in limbo.

In an accompanying press release, UNLV law professor Sylvia Lazos, policy director for Educate Nevada Now, one of the litigants that challenged the ESA law, declared, “It’s time for Treasurer Schwartz to face the fact that ESA vouchers were declared unconstitutional because they would have drained tens of millions of dollars from Nevada’s public schools, with Clark County schools losing over $30 million in the first year alone. By blocking this program, we’ve prevented further cuts to public school budgets, which would have increased class sizes and reduced essential programs for students, including English language learners and other students in need of additional supports.”

The problem with this is that the ESAs are earmarked only to state funding — and only 90 percent of that in the vast majority of cases — and have no impact whatsoever on public school funds derived from local taxes and federal revenue.

According to National Education Association’s most recent figures, Nevada public schools spend nearly $9,000 per pupil on average. So, for every pupil who takes the $5,100 savings account, there is about $3,900 more in funding for public education for those who remain — in less crowded classrooms.

In fact, the impact is far greater in many rural counties where the ratio of local funding is even greater due to mining related tax revenue and other factors. According to data for fiscal year 2014 provided to lawmakers by the Legislative Counsel Bureau, local revenue accounts for more than 80 percent of public school funding in Eureka, Humboldt and Lander counties, while the state provides only 10 percent or less.

The state provides about half or more of the K-12 funding in Churchill, Lincoln, Lyon, Mineral, Nye, Pershing and White Pine. Statewide, federal revenue accounts for more than 9 percent of funding.

This discrepancy is even more pronounced when one takes into account that state funding for each school district is adjusted to account for lower local revenue and higher costs, such as transportation in rural areas.

But the education savings account in each of those counties is still only 90 percent of the statewide average, or $5,100.

Thus, when public schools have fewer pupils to teach, transport and feed, there is more money for those remaining.

So, when lawmakers meet in Carson City in the coming weeks they should take the opportunity to increase K-12 per pupil funding by finding a constitutional funding source for education savings accounts.

It is simple math. 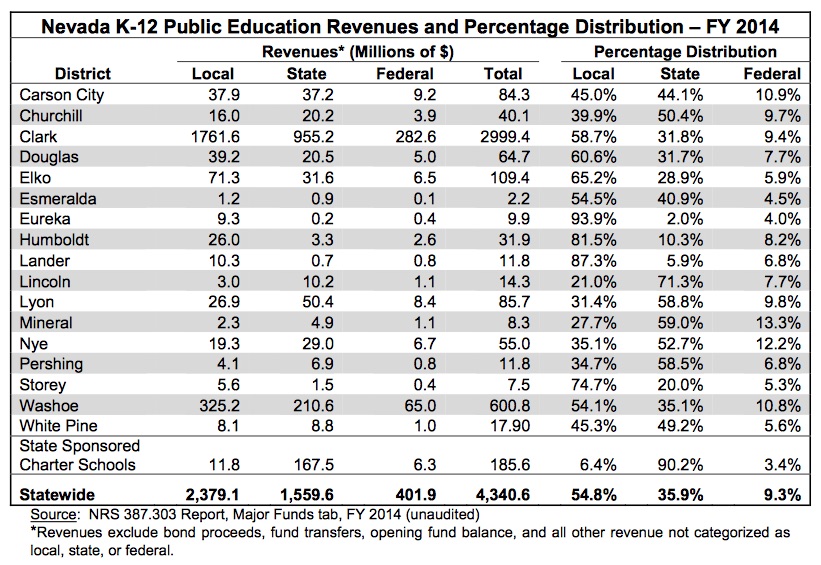