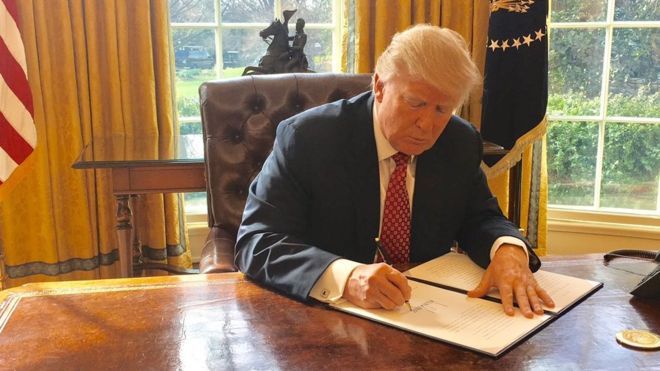 (Thomas Mitchell, 4TH ST8) – That federal judge in Hawaii who issued a temporary restraining order blocking President Trump’s latest executive order on immigration from six Middle Eastern countries can read minds and knows Trump is a liar. He is not temporarily barring immigrants from those countries until proper vetting can take place because they might be terrorists. No, he is banning Muslims and that is religious discrimination and contrary the Establishment Clause in the First Amendment.

The Government appropriately cautions that, in determining purpose, courts should not look into the “veiled psyche” and “secret motives” of government decision makers and may not undertake a “judicial psychoanalysis of a drafter’s heart of hearts.” … The Government need not fear. The remarkable facts at issue here require no such impermissible inquiry. For instance, there is nothing “veiled” about this press release: “Donald J. Trump is calling for a total and complete shutdown of Muslims entering the United States.[]”… Nor is there anything “secret” about the Executive’s motive specific to the issuance of the Executive Order …” (TRO on travel ban)

The judge then quotes Rudolph Giuliani as saying on television that Trump called him and said he wanted a “Muslim” ban and wanted him to help find a way do it legally.

Never mind that Trump and Giuliani may have actually found a way to protect Americans from potential terrorists by avoiding any religious test, it is the ulterior motive that counts and trumps anything else.

Never mind that Giuliani later said he and others focused on “instead of religion, danger. The areas of the world that create danger for us, which is a factual basis, not a religious basis. Perfectly legal, perfectly sensible …” and “not based on religion. It’s based on places where there are substantial evidence that people are sending terrorists into our country.”

It was what was in Trump’s heart that counts. Remarks from the campaign trail also were quoted in the ruling.

Never mind that the Establishment Clause was meant to protect Americans from religious discrimination and not everyone in the world, especially where they have a propensity to behead those not of their own religion. Never the fact the immigration order does not affect the countries in which 90 percent of Muslims actually live.