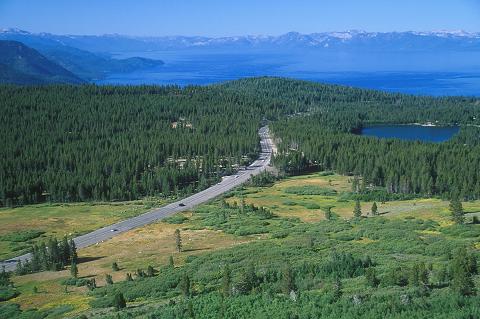 (Tom Daly) – Mt. Rose highway is, arguably, the only scenic corridor in Nevada, notwithstanding the Nevada legislature designating the Las Vegas strip as ‘scenic’ (please).

Despite Nevada’s 110,567 square miles only this state route, about a 24 mile-long stretch starting at South Virginia Street and ending at Incline Village, warrants this designation.

So, you might think that those federal, City of Reno and Washoe County entities, who control the zoning and development decisions along this highway, would carefully limit such plans to ensure they do not ruin, for eternity, this very small venue of spectacular views for those who transit this corridor.

The City of Reno has approved a massive apartment development on the eastern most end of Mt. Rose highway opposite the Summit Mall.  So much for the Mayor and City Council’s commitment to scenic beauty.  They value only the tax revenue.  Enjoy your thirty pieces of silver, at least until the next election.

The project’s applicant, Towne Development of Sacramento, Inc., on April 5th presented their plan, which was demonstratively rejected by local community residents, this Commissioner and the entire county Planning Commission, as not in keeping with the density (adjacent communities are 3 houses per acre) and visual impact appropriate for this scenic corridor.  Further, traffic concerns, the impact on schools and fire issues were not adequately addressed in the applicant’s plan.

Your Planning Commission has continued this matter to their May 3rd meeting for further review.

This proposed high density development would further overwhelm an already overtaxed Hunsberger Elementary School, now at 103% of capacity, without any offer by the developer to, perhaps, provide for one or more temporary classrooms, a band-aid solution   but at least a fig leaf to the community.

The plan’s western most homes, to be built on proposed dense skinny lots (lot set-backs reduced to 5 ft.) are adjacent to an untreated ‘high hazard’ wildfire zone but show no clear space, as required by the County and TMFPD wildfire code.  Further, on the plan the four new streets with cul de sacs show an island on each, limiting fire vehicle turnaround, as required by the fire code.

Due to a quirk in the county’s development code, this project is not subject to a Special Use Permit, so your Planning Commission has only this one opportunity to impose conditions of approval.

I support residential development for these parcels, now zoned for ‘Neighborhood Commercial (NC)’, but the applicant’s planned excessive density, lack of appreciation for the scenic corridor and unaddressed traffic, school and fire issues are unacceptable.

Not on my watch and not with my vote.

Thomas Daly is the Washoe County Planning Commissioner for District 2.