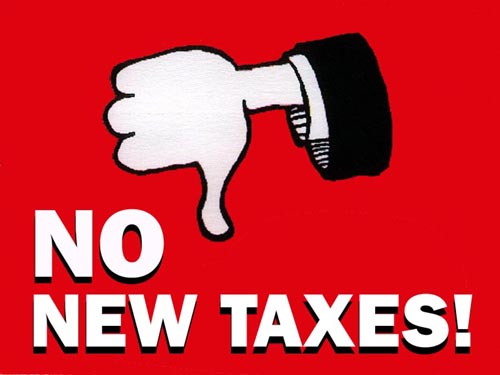 What with the in-your-face (and wallet) vote of the Republican-controlled legislature on a $1.4B tax increase last session, discussions and debates over how taxes get implemented have erupted across the state, even reaching rural Douglas County.  This is the county, south of Reno, that has the highest percentage of Republican voters.

It’s so “R”-dominated that all of the current five County Commissioners fall under that appellation, but (as seen far too often) they don’t necessarily vote like “R’s” – a confounding situation that prompted two true-red “R” candidates for commissioner, Dave Nelson and Larry Walsh, to sign the Taxpayer Protection Pledge (TPP) applicable to county governments.

The county TPP originated with a local non-partisan citizen’s organization called the Good Governance Group, which is a grassroots organization whose mission is to increase the dialogue between those who manage the county, or those entities who exert influence within the county, and residents of all political stripes.

A majority of the GGG members weren’t happy about what they saw as an air of disregard for how residents felt about the ways their taxes were being raised and spent, and, violá the Taxpayer Protection Pledge came into being.

The text of the Pledge has the signatory promising that he or she “will oppose and vote against any and all efforts to either increase taxes or to impose general obligations bonds without a vote of the electorate” (emphasis added), and goes on to guarantee that the signatory will honor and follow the decisions on taxes and bonds that the voters make “throughout [his or her] elected term.”

Since the turn of the century, Douglas Countians have seen their Board of Commissioners approve increases in utility taxes, sales taxes, and most recently, gas taxes.  The county’s voters also voted down bonds to build a senior center twice, only to have the last round of commissioners, one of whom is Nelson’s incumbent-opponent, do an end run around the voters and build it anyway, by way of a $14 million general obligation bond authorized by the Board of Commissioners alone.

Come to think of it, maybe that’s where Gov. Brian Sandoval got his idea to pull the same kind of shenanigan.

There seems to be a trend starting at the very top in national political thinking, running full speed through state governments and filtering into local governments as well that calls for making the voters and taxpayers irrelevant except when their votes are needed to get their “wiser” leaders elected or to get dollars extracted from taxpayers’ pockets by those “wise” leaders without any voter input.

Voters in Douglas County have the opportunity to put a stop to that trend at the local level on June 14th.

Nevadans should spark a movement! All politics is local, right?  So what better place to really root out the power grab underway. 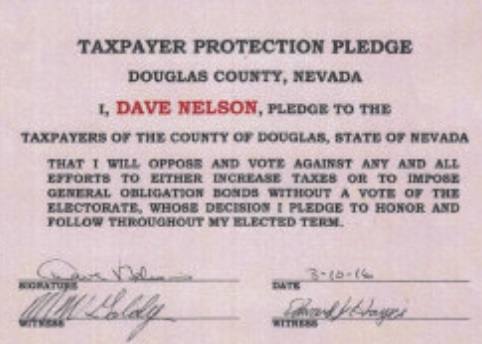 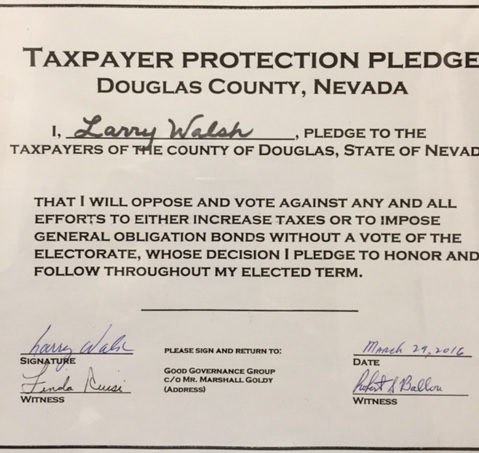 Ms. Starrett lives in Gardnerville, NV and is the campaign manager for Mr. Walsh