Mueller Exactly The HACK His Supporters Said He Wasn’t 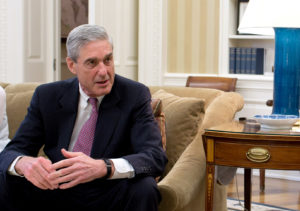 He proved it in nine minutes last week when he did exactly what prosecutors never do which is to say to the world that he wasn’t exonerating President Trump from obstructing the investigation of what wasn’t a crime in the first place.

Prosecutors have exactly one decision to make in the charging process.  Either charge or don’t charge.  And they can empanel a Grand Jury so they actually don’t have to make the decision themselves.  But they do NOT and CANNOT exonerate.  It is judges and juries who make decisions as to guilt.  And even there, “not guilty” simply means the prosecution couldn’t prove guilt beyond a reasonable doubt.

The reason for that is because our legal system assumes you are innocent unless PROVEN guilty.

You never saw Jack McCoy in Law and Order (Sam Waterston) call a press conference and say that a defendant had been exonerated.  He (or his predecessors) might have, in 456 episodes, dropped the charges, but prosecutors do NOT exonerate.

Mueller was appointed to investigate Russian interference in the 2016 election and, specifically, did the Trump campaign collude with the Russians.  The facts now coming to light about the origins of that appointment are—to say the least—odd.  In fact, President Trump appears to be right to say out loud that it was an attempted “take-down” of a duly elected President.

Mueller spent somewhere near $34-million, hired 19 lawyers (the “angry Democrats” as the President called them) used 40 FBI agents, empanelled a Federal Grand Jury and came up with bupkis where Trump, his family and his campaign were concerned.  If you don’t understand Yiddish, that means nothing, nada.

And now what is loosely called the “intelligence community” is outraged that President Trump has given the nation’s top law enforcement official the authority to declassify and investigate the sequence of events that led to Mueller’s investigation.

Assuming the Russkies did, in this country, what Barack Obama (actually his lackeys) did unsuccessfully in Israel—distribute fake information during election season—exactly what laws did they violate?  We do have a First Amendment in this country which protects everyone against government censorship.  A few Russians buying facebook ads and distributing fake news?  How is that different from CNN International?  Or any number of US based shortwave radio stations aimed at other countries.

Is it now illegal to take sides in an election if you are not a citizen of the United States?

And then there is the hacking of DNC bigshot John Podesta’s email.  I never heard Podesta say he didn’t write them.  Yes, it’s illegal to hack someone else’s email, but it’s not like Mueller charged the Trump campaign or anyone connected with it.

Also suspect is Hillary’s lack of understanding that when you call half of America “deplorable” they may, possibly, vote against you.

Apparently, she failed to learn that little factoid during her time in Arkansas which happens to be a state where real people live waaay outside the beltway.

The problem with Democrats—with the left in general—is they have pioneered the concept of getting their way no matter what it takes.

If we in Middle America vote for Donald J. Trump, they say screw him.  They will use whatever they have—legal or illegal, logical or illogical—in an attempt to take him down.

The “Russian” investigation was just another piece of the game.

It’s hard to call yourself a patriot when you commit treason against America because you lost an election.  The 2020 election should remind the left, writ large, of that.

NN&V StaffApril 29, 2020
Read More
Scroll for more
Tap
If It Has A Heartbeat, It’s Not A “Fetus”, It’s A Baby
Boomers’ Sad Overall Legacy to Children