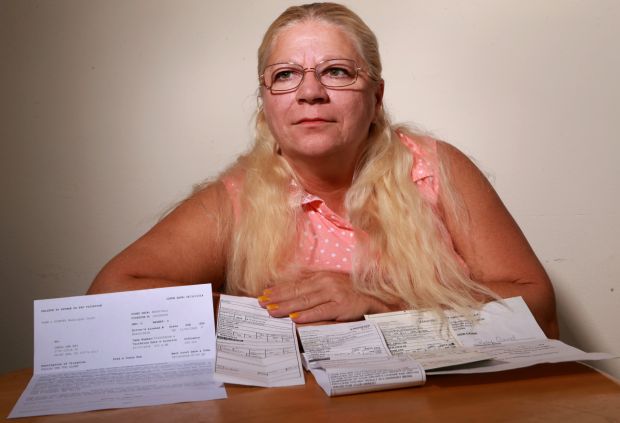 Carol Ray, of South St. Louis County, poses with two unpaid tickets, a warning and a failure to appear/pay notice from two municipalities on Friday, Sept. 19, 2014. She says she cannot afford to pay them, and she has skipped court dates for each of them for fear of being arrested. (Photo from St. Louis Post-Dispatch)

(Virginia Young of St. Louis Post-Dispatch) – Jefferson City — Critics say many cities in St. Louis County write tickets just to raise revenue. The practice often leads to jail, debt, lost jobs and an atmosphere of distrust, especially among those who are poor and African-American.

A compromise forged Wednesday helped put the finishing touches on one of the Missouri Legislature’s major initiatives: clamping down on St. Louis County cities that rely heavily on traffic ticket revenue.

Under the deal, traffic fines could furnish no more than 12.5 percent of the general operating revenue for cities in St. Louis County and 20 percent in the rest of the state.

The Senate voted 31-3 to pass the bill Wednesday night. The House could take it up Thursday and send it to Gov. Jay Nixon.

Sen. Maria Chappelle-Nadal, D-University, City, said the bill was not the “fix-all” to problems in Ferguson, where the killing of Michael Brown, an unarmed black teen, by a white police officer last August drew worldwide attention.

“This is just one of those answers to my constituents who are really upset with a system that has been broken a very long time,” she said.