Fake news outlet CNN, which trashes President Donald Trump on a daily, if not hourly basis, has refused to air a TV commercial the Trump folks put together celebrating his first 100 days in office.

CNN has its knickers in a knot over a graphic displayed in the spot which refers to the mainstream media as “fake news.”  Sounds like a certain thin-skinned TV network needs to get itself a widdle therapy puppy.

Meanwhile, Republicans in Congress – the biggest danger to the Trump presidency – continue to swing and miss at every major legislative pitch thrown their way despite the fact they have the majority in both the House and the Senate.

House Republicans, who have been working on ObamaCare repeal for seven years now, STILL can’t cobble together a bill that will satisfy enough moderates and conservatives to get the 218 votes needed for passage.

And by the way, the moderates are wrong.

You can’t charge people with pre-existing conditions the same rate as healthy people in a free market.  That’s just stupid.  It’s like charging smokers and non-smokers the same rate.  Or charging a driver who hasn’t even gotten a parking ticket the same rate as a guy with three DUIs.  Derp.

Those same House Republicans – despite wonky Speaker Paul Ryan’s vaunted “A Better Way” agenda he’s developed over a period of years – can’t seem to pass a budget and are once again punting the ball with a temporary “omnibus” bill to fund the government – including funds for Planned Parenthood and sanctuary cities – through the fall.

Sounds like it’s time for the president to “Pull a Patton.”

There was a scene in the award-winning WWII movie in which an officer wasn’t getting the job done.  So Gen. George “Blood & Guts” Patton fired him on the spot and gave the company’s executive officer an immediate field promotion.

“Major!” Patton barked.  “You’re now the commanding officer. You’ve got four hours to break through that beachhead.  If you don’t make it, I’ll fire you, too!”

Of course, the president can’t literally “fire” Ryan. But there are ways to get him ousted. Just ask John Boehner.

P.S.  Hillary Clinton did an interview on fake news CNN Tuesday and declared that if not for the Russians, the FBI and women-hating men – oh, and if the election had been held on October 27 instead of November 8 – she’d be president.

Which is kinda like the old saying that “If we had some ham, we could have ham and eggs, if we had any eggs.”  What a crybaby.  Shut up already and go get yourself a therapy puppy.

“Major Republican lawmakers and donors are scheduled to host a fundraiser for Nevada Attorney General (and likely 2018 gubernatorial candidate) Adam Laxalt on May 17, according to an invitation for the event obtained by Score.

“The fundraiser will be held at the Washington Ricketts residence.”

Conservative Danny Tarkanian, who came within a whisker of winning the seat last November, is said to be eying another run.  Also rumored to be taking a look at the race is term-limited Las Vegas City Councilman Stavros Anthony.

And slimy former Clark County GOP Chairman Dave “For Himself” McKeon is also telling people he plans to enter the field, along with, once again, gadfly candidate Annette Teijeiro.

This is a special interest bill in the interest of only ONE PERSON, North Las Vegas Constable Bob Eliason, who refuses to comply with a state law that requires urban constables to undergo training and become a certified peace officer within 18 months of their election.

Eliason has now been in office for over two years.  SB 250 would rescind the common-sense training and certification requirements for the only guy in office who has failed to do so.

“Sir, you attract more skinheads than free Rogaine.  You have more people marching against you than cancer. You talk like a sign language gorilla that got hit in the head. In fact, the only thing your mouth is good for is being Vladimir Putin’s c–k holster.” –Late Show host Stephen Colbert in a homophobic Monday night rant against President Trump, #FireColbert

You Are Now Entering…The Innovation Zone!

Clarifying the Clarification on the Revolution Resolution 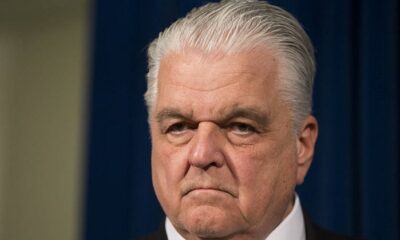 The Coronavirus Resolution the Nevada Legislature SHOULD Pass Today