My 10-year-old son has a new black friend who went to the UNLV basketball game with us Friday night.  And a situation arose where I used the term “boy” in a normal, completely innocuous manner when I advised, “Boy, you better stand up if you expect to catch one of those t-shirts the cheerleaders are throwing into the stands.”

Now, having been properly indoctrinated by professional race-hustlers for many, many years, I immediately caught myself thinking I’d broken a major taboo.  You’re not supposed to call a black boy “boy” even if he is, you know, a boy.  If you do you’re a racist, right?

But then I thought about it this way…

If I DIDN’T call the boy “boy” in a situation where I’d call any other boy “boy,” isn’t it inherently racist to treat the black boy differently from every other boy simply because of his color?

By the way, the boy didn’t seem to notice or care whatsoever.  He just stood up and tried to catch a t-shirt.   Maybe it’s because he’s homeschooled by Air Force parents and hasn’t been caught up in the race-hustling PC crap.  Maybe there’s hope after all.

P.S.  Our Thanksgiving weekend “Saga of the Lost Dog” has thankfully come to a happy ending.  The rescued dog’s owner – our former babysitter, Nicole – picked up “Baby” yesterday after we had him micro-chipped, vaccinated and tagged.

Baby still needs a professional haircut, but here’s a pic of the happy Baby-Nicole reunion at our house last night… 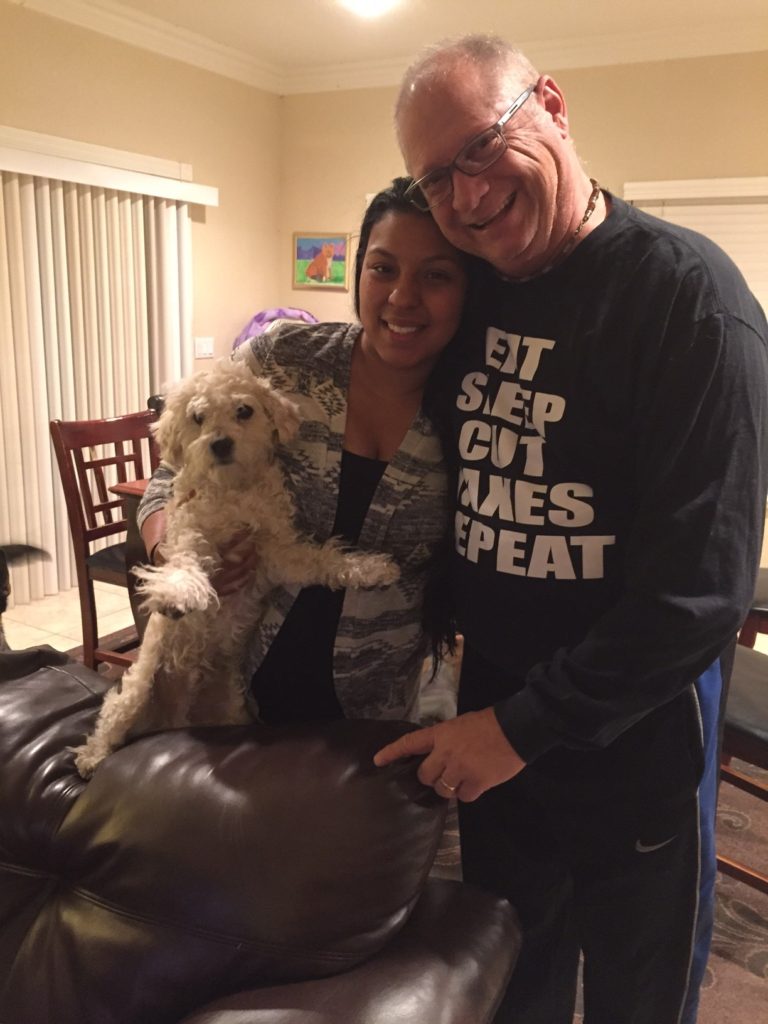 * * * When Donald Trump warned that the election was “rigged” against him, most of us on the right understood exactly what he meant.  It wasn’t so much the notion that ballot boxes were being stuffed.  It was the crooked, biased, coordinated shenanigans on the left, especially by some in the media.

Like how the CEO of the online chat website Reddit admitted last week that he “abused his power” by using his administrative powers “to secretly edit user comments” on a pro-Trump forum to make it look like critical comments directed at him on the forum were actually directed at the leaders of the pro-Trump group.

That Trump was nevertheless able to win this “rigged” election is still absolutely amazing.

* * * Over the weekend, President-elect Donald Trump tweeted: “In addition to winning the Electoral College in a landslide, I won the popular vote if you deduct the millions of people who voted illegally.”

The left and many in the mainstream media (but I repeat myself) came unglued, declaring in one voice that there was “no evidence” to support Trump’s claim.

Then again, there’s no evidence to refute it either, since no one is required to produce a photo ID before voting.  So we here at Muth’s Truths rule Trump’s claim as: Possibly True.  Now let’s pass some voter ID laws, OK?

* * * When it comes to the Secretary of State slot in the Trump administration, put me down as #NeverRomney.  His anti-Trump actions and verbal assaults almost gave us Crooked Hillary.  You just can’t forget or reward that.

Or as my friend and conservative icon Richard Viguerie put it, “it isn’t that Mitt Romney would get in the way of draining the swamp – it is that he, and other establishment Republicans like him, ARE the swamp.”  Read Richard’s full column on this subject by clicking here.

* * * In Ventura County, California, local judges have been performing thousands of Saturday weddings on their days off for a highly discounted fee of just $65 for the last 30 years.  That comes to a screeching halt in January when a new law – authored by some dumbass Democrat Assemblyman – goes into effect banning even the nominal payments to the judges.

The couples were happy.  The judges were happy.  And the public interest of promoting marriage was being served.  Why can’t liberals just leave people who are happy and not bothering anyone else alone?

“There’s a massive voter fraud investigation going on in North Carolina. …  I think there’s going to be a recount. There’s probably going to be litigation in the courts. The people of North Carolina still don’t know who their governor is. … It’s so sloppy you can’t tell where the incompetence in an election system ends in some states and where the fraud might begin.” – Election expert John Fund of National Review