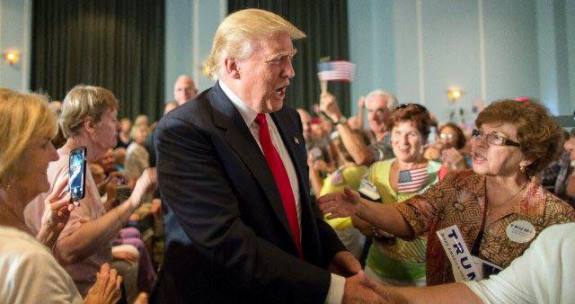 If Donald Trump does not pull off a miraculous, against-all-odds, come-from-behind victory tomorrow, Trump won’t get the blame from grassroots Republicans.  Republican establishment figures who either refused to support the GOP’s nominee or gave, at best, tepid, grudging support will be blamed.

And the simmering intra-party civil war that’s been burbling for the last few years will erupt in a full-blown, take-no-prisoners political revolt – including a mass exodus of GOP voters who will change their registrations to independent.

And yes, Sen. Ted Cruz.  Even though he got with the program late…it was too little, too late.  The damage he did at the GOP convention in Cleveland simply can’t be erased.

P.S.  That protestor who interrupted Donald Trump’s speech in Reno on Saturday told the Associated Press that “It’s absolutely ludicrous” that he was an operative for the Democrats even though “he has donated to (Hillary) Clinton’s campaign and canvassed for her last week.”

Liars of a feather…

In other news, Democrats who filed frivolous lawsuits trying to intimidate and block GOP poll-watchers have now lost in every venue where they tried this stunt.

In other news, the Kaepernick Curse continues to dog the San Francisco 49’ers (1-7), who were pummeled 41-23 by the New Orleans Saints.

Also, Republican candidate Christine DeCorte, running in AD18, left me a voice mail saying her “C” rating from the National Rifle Association (NRA) was probably because she chose not to answer the last question in the organization’s survey because it was too complicated and involved too many hypothetical variables.

And with that, here’s my Election Eve final list of who I think I’d vote for tomorrow…though I reserve the right to change my mind right up to the time just before taking and unlawfully posting a “selfie” of my completed ballot for posting on social media…

Nevada Senate District 6:  none of the above

* Running against a tax-hiking RINO

Supreme Court, Seat A: None of the Above

Supreme Court, Seat E: None of the Above

Court of Appeals, Department 1: None of the Above

Court of Appeals, Department 2: None of the Above

Court of Appeals, Department 3: None of the Above

Sorry, but you’re on your own for races not listed above.  And BTW, these “picks” should NOT be construed or publicized as official endorsements by me or any of my affiliated organizations.

“Chuck: Well stated and argued, as usual (“ELECTION ’16: Some Democrats I’m Supporting and Why”).  Agree completely about never rewarding a RINO.  RINOs are far worse than liberal Democrats, in my opinion.  At least with liberal Democrats I know what I’m getting. RINOs pull the ultimate bait-and-switch, trash the Republican brand, and give fiscal conservatives nowhere to go. Keep up the great work and let’s make America great again!” –Jeffrey Purtee, Reno