Hoo-wee!  Was that ever a weekend!  I checked out of the hotel yesterday morning, packed up our stuff from the “green room,” went home, and took THREE naps.  Talk about exhausted.

Yes, Sheriff Joe Arpaio flew into Las Vegas Saturday afternoon and delivered later in the evening his first public speech since being pardoned by President Donald Trump for that B.S. “contempt” conviction by an Obama judge who illegally tried to force him to make illegal immigration legal.

And he did not disappoint.

Sheriff Joe made a surprise appearance at the conference itself right after lunch.  The crowd gave him a “standing o.”  It was electric.  And then he stuck around all afternoon talking one-on-one with attendees and taking tons of “selfies.”

The sheriff then delivered one whale of a speech Saturday night after accepting his “Courage Under Fire” award; mixing humor with condemnation of the political witch hunt the Obama regime launched against him.  He also announced some of his plans for the future. 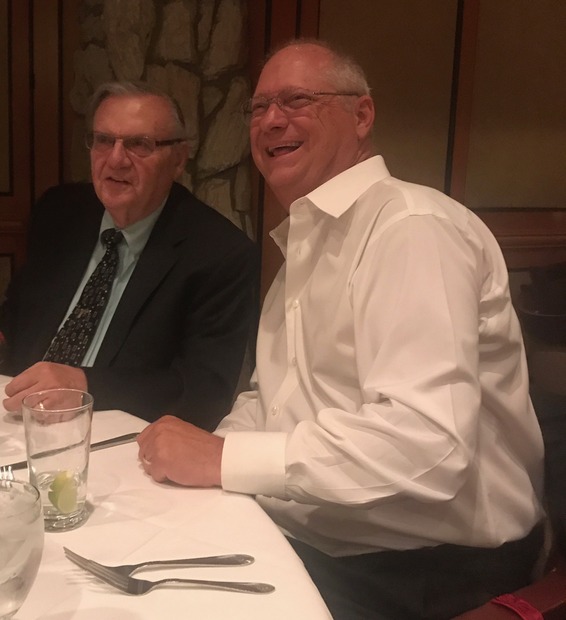 Sheriff Joe & I having the last laugh at awards dinner!

Rest assured, we have NOT heard the last from America’s Toughest Sheriff.

But you know who WAS disappointed?  The alt-left protestors who tried to ruin our event with a major demonstration on the Strip.

Since we didn’t announce the “undisclosed” off-Strip location until after 3:00 pm at the conference – and refused to confirm in advance whether or not Sheriff Joe was actually going to attend in person – we took the wind right out of their sails and denied them the national story they were hoping to generate.

Their demonstration turned out to be a complete flop.

Indeed, instead of the predicted 400+ protestors on the Strip at 5:30 pm Saturday night, the crazies were able to get only about two dozen to show up and throw their little temper-tantrum.  Lame-o!

And although a pair of George Soros’ minions from Washington, DC tried to get into the conference itself, we caught them and kept them out.  As such, not a single disruption of CLC ’17.

While these losers thought they’d won after I decided, for everyone’s safety, to move the dinner venue, they ultimately lost big time.  Yes, their threats of violence chilled our free speech.  But they were unable to kill it.  Epic fail.  In the end, we won.  They lost.

As the saying goes, he who laughs last, laughs best.  And I’m laughing my arse off this morning!

I’ll have more on this incredible event – including a disappointing “he who must not be named” story of fake news bias by a reporter for the Ralston Rag blog – later this week.  But right now I think I feel another nap coming on!

On Saturday morning, while hosting the CLC, I checked my Twitter account on my iPhone and discovered I’d been locked out.

Upon further investigation, I learned that foul-mouthed, alt-left, black racist Baby Huey had complained because I’d referred to him as a moron and remarked upon his substantial Big Mac-fueled girth in three tweets that were in response to him calling me MUCH worse.

Apparently the chunkster can dish it out but can’t take it.

I just deleted the tweets that got his pantyhose in a bunch and my account has been restored.  However,  this was indeed censorship.  My speech was cut off without notice or inquiry while his filth, to this day, remains on the Twitter platform.

That said, it’s THEIR platform.  Temporarily shutting my account was not a violation of my First Amendment rights.  It’s wrong.  It’s hypocritical.  It’s totally biased.  But again, it’s THEIR megaphone.  I’m not entitled to use it.

So instead of kvetching about Twitter, we need someone to develop a conservative alternative.

Base Support for Roy Moore Not Strange At All

Folks, pay attention to this run-off election in Alabama between Sen. Mitch McConnell’s guy and the guy favored by grassroots conservatives.  The political dynamics are fascinating, especially as they relate to President Donald Trump and the fake news media’s campaign to unseat him.

McConnell is backing appointed Sen. Luther Strange.  But if the polling is accurate, the voters are overwhelmingly backing former Judge Roy Moore

Publicly, the President is backing Strange.  And if you listen to the fake news media – though, why would you? – this race will be a reflection of Trump’s influence and ability to control GOP primaries.  The story the media is dying to broadcast is that “Trump’s guy lost” and he has no power over his supporters.

You see, Trump’s supporters ain’t the mindless rubes that media makes them out to be and the alt-leftists are.  They see through the smoke screen.  They understand the game.  They know why Trump is publicly supporting Strange.  They “get it.”

Trump supporters are going to support the Trump supporter no matter what Trump says.  And Trump, not to mention America, will be better off for it.  It’s just that simple.

“While never-ending palace intrigue continues in the nation’s capital, a bodacious group of Libertarian-leaning conservatives is meeting at a Las Vegas resort to focus on must-do tasks. The Conservative Leadership Conference gets underway Friday and stretches across the weekend with a noisy agenda and an interesting mix of 25 speakers.

“The event also marks a certain debut: Former Arizona Sheriff Joe Arpaio is also on the roster, and is a highlight of the event. He will speak on Saturday, and also receive a “Courage Under Fire” award.  Also among those on hand to have their say: Americans for Tax Reform President Grover Norquist, talk radio host Herman Cain, National Review columnist John Fund, former Trump adviser and author Roger Stone.” – Jennifer Harper, Washington Times, 9/14/17