Neil Gorsuch Is Sworn In As The 113th U.S. Supreme Court Justice 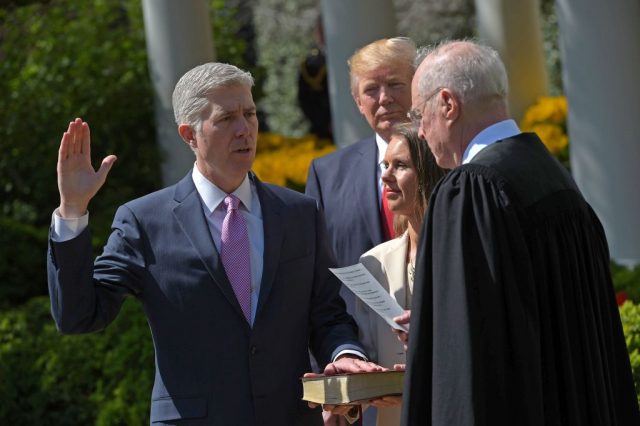 Neil Gorsuch is sworn in as the 113th justice of the U.S. Supreme Court. (Courtesy: Mandel Ngan/AFP/Getty Images)

(Kaitlan Collins, The Daily Caller) – Neil Gorsuch was sworn in as the 113th justice of the Supreme Court Monday, taking the seat that was once occupied by Justice Antonin Scalia nearly 14 months after his death.

Justice Anthony Kennedy swore in the 49-year-old Colorado native during a ceremony in the White House Rose Garden, making him the first justice to serve alongside one of his former law clerks.

“That’s sort of a big deal, isn’t it?” Donald Trump joked to an audience that included other Supreme Court justices.

“We are gathered here today for a truly momentous moment for our democracy — the swearing in of a Supreme Court justice,” Trump said. “It’s a privilege to have you here for this historic moment on a spring day in the Rose Garden. Spring is the perfect backdrop for this because we are in the process of rebuilding and renewing, and a new optimism is sweeping across our land.”