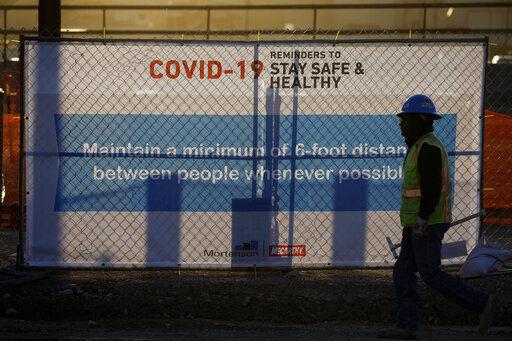 A worker walks by a sign with guidelines for protection from COVID-19 as construction continues at Allegiant Stadium, future home of the Raiders NFL football team, during the coronavirus pandemic Tuesday, March 31, 2020, in Las Vegas.
AP Photo/John Locher

(Kimberly James) – With Nevada seeing record numbers of people filing for jobless benefits since the beginning of the COVID-19 pandemic in March, the state’s unemployment trust fund is starting to run low.

Through the week ending July 4, the Nevada Department of Employment, Training and Rehabilitation reported that more than 560,000 unemployment claims have been filed this year, 96 percent of those since mid-March; this is more than six times the number of claims DETR received in December 2008 during the Great Recession, according to the Las Vegas Review Journal.

“It appears the state will likely do what they did during the 2009 recession,” Randi Thompson, Nevada state director of National Federation of Independent Business, told The Center Square. “They are likely to apply to the Fed for a loan to cover the amount we will need to meet current demand.”

Nevada has had the highest unemployment rate in the country at 25.3 percent in May, according to U.S. Department of Labor data. The trust fund held just under $2 billion at the beginning of the year; as of the week ending July 4, the fund balance was just under $800 million, according to DETR.

Nevada is not alone. Several states already have or are close to exhausting their trust funds and will request help from the federal government to continue providing benefits. Those filing for unemployment will receive their benefits without interruption, but employers might face higher payroll taxes.

“While UI rates were actually lowered about two years ago, after we paid off the bond and replenished the account, we are likely going to see UI rates increased next year, as we ‘lather, rinse, repeat’ so to speak,” Thompson said.

The state faced similar circumstances during the Great Recession, borrowing from the federal government in order to continue to pay benefits to the 13.5 percent of Nevadans who were unemployed. It took years for the state to rebuild its trust fund, and it may all be depleted in the next seven weeks.

Rosa Mendez, public information officer at DETR, told The Center Square there is some additional income that may stretch the trust fund a bit further.

“In August, employer contributions for wages from April through June will be due, and DETR is working with the U.S. Department of Labor to get federal reimbursement for the first week of benefits in each claim, a provision from the CARES Act,” Mendez said.

The economy reopening and Nevadans returning to work is a positive sign and could slow the projected drain on the trust fund, but that, said Cara Clarke, vice president of communications at Vegas Chamber, is not in the modeling seen right now.

“Rising cases are a concern as they may lead to further business restrictions and shut-downs,” Clarke told The Center Square. “And those restrictions may lead to additional layoffs and furloughs which would result in more claims being filed against the unemployment insurance fund.”

The Center SquareMay 5, 2022
Read More
Scroll for more
Tap
Nevada Republicans Once Again are Their Own Worst Enemy
Nevada Held Hostage: Top 10 Things to Know about the Special Session