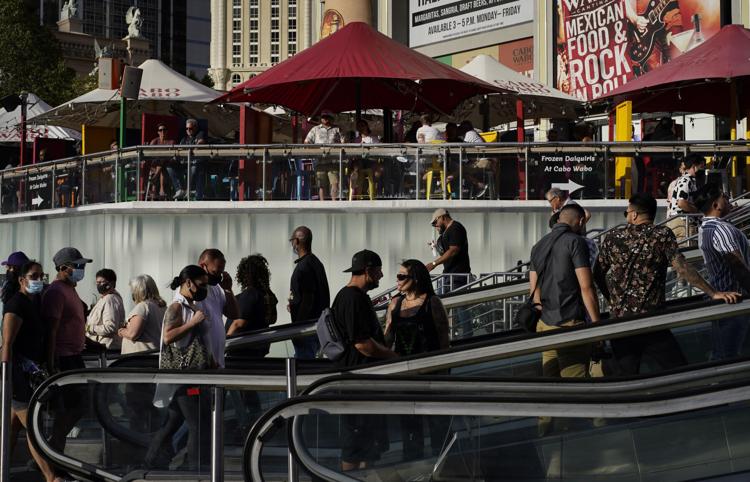 People walk as others dine on the Las Vegas Strip, Saturday, April 24, 2021, in Las Vegas. Las Vegas is bouncing back to pre-coronavirus pandemic levels, with increases in airport passengers and tourism.
AP Photo/John Locher

(Robert Davis) – Nevada posted the nation’s highest increase in gross domestic product (GDP) during the first quarter of 2021, according to federal data.

Nevada saw its largest increases in accommodation and food services, according to the BEA. Nationwide, the sector posted a 16.9% increase in the first quarter. Durable goods exports as well as professional, technical, and scientific services also saw significant gains.

All 50 states saw GDP increases in the first quarter, the BEA said. But, the national average growth stood at 6.4%, compared to Nevada’s 10.9%.

“It’s no secret that Nevada’s economy took the hardest hit from the COVID-19 pandemic, but the recent GDP report from the U.S. Bureau of Economic Analysis proves we will recover stronger and build the Nevada our families deserve,” Sisolak said in a statement.

At the height of the pandemic, Nevada’s unemployment rate skyrocketed by 9%. In April 2020, over 28% of the state’s residents were unemployed, with industries like hospitality and tourism bearing the brunt of the pandemic’s economic impacts.

For comparison, the Nevada Department of Employment, Training and Rehabilitation estimated the state’s unemployment rate to be at 25% during the Great Depression, according to a report by KTVN.

However, the state’s economy is continuing to heat up as the vaccination rate continues to increase. According to the Bureau of Labor Statistics, Nevada posted the greatest year-over-year drop in unemployment last month with a 16.7% decrease.

“In order to ensure we continue down a successful path, we must remain focused on vaccinating our residents, putting people back to work, diversifying our economy, and ensuring that Nevada’s recovery reaches every individual and family,” Sisolak continued.

Michael Brown, director of the Governor’s Office of Economic Development, said the data points to the state entering “the fast lane of the road to recovery.”

“Now we must focus on building resilience into our economy, to smooth out the bumps, with increased diversification in manufacturing/logistics, energy, technology, and healthcare with the goal of delivering good jobs today and better jobs tomorrow,” he added.