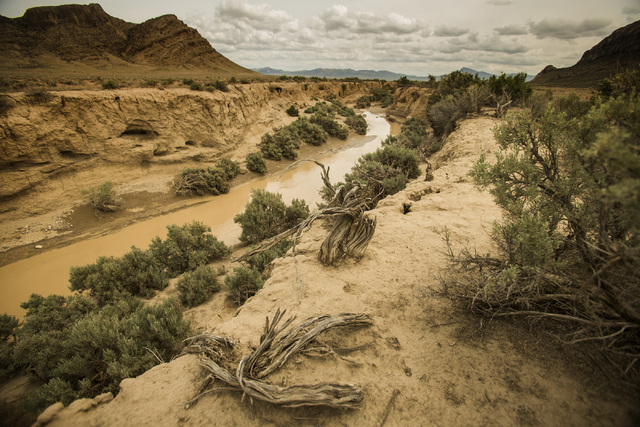 (Thomas Mitchell) – What do you call a system in which a person living in a far-away mansion dictates how vast swaths of land may or may not be used and the local peasants have no say in the matter whatsoever?

According to Nevada Republican Congressman Cresent Hardy, paperwork has already been prepared for President Obama’s signature that would declare 704,000 acres of federally controlled land in Hardy’s district a national monument, closing the land to most beneficial uses.

The so-called Basin and Range National Monument would cover the Garden and Coal valleys — larger than the state of Rhode Island — on either side of the Lincoln and Nye County border. Local elected officials oppose the designation, which is authorized by the 1906 Antiquities Act.

A year ago Nevada’s senior Democratic senator, Harry Reid, introduced a bill that would ban oil and gas drilling and mining on 805,100 acres of land in the same area. His effort has since been joined by Democratic Rep. Dina Titus, whose district is in the urban core of Las Vegas.

The draft proclamation prepared for Obama’s signature states, “All Federal lands and interests in lands within the boundaries of the monument are hereby appropriated and withdrawn from all forms of entry, location, selection, sale, leasing, or other disposition under the public land laws, from location, entry, and patent under the mining laws, and from disposition under all laws relating to mineral and geothermal leasing …”

In January, Nevada’s four Republican congressional representatives announced that they were introducing the Nevada Land Sovereignty Act of 2015, which would prevent the president designating or expanding national monuments by executive action without Congressional approval.

Obama has designated eight monuments so far. This past year Obama designated as monuments, despite local opposition, the San Gabriel Mountains National Monument in California and the Organ Mountain-Desert Peaks in New Mexico. Bill Clinton did the same in 1996 by creating the 1.8 million-acre Grand Staircase Escalante National Monument in Utah with only 24 hours notice. The designation was so unpopular in Utah that he announced the decision at a ceremony in Arizona.

Upon learning of the president’s plan, Rep. Hardy said he was “appalled and deeply concerned about the national security implications” of the move, because the Air Force uses the area for training.

Hardy managed to attach an amendment to the Defense Department budget that protects national security-related activities on or above land associated with a Military Operations Area. He noted that training exercises often require deployment of troops on the ground to coordinate attack simulations.

“Yet the draft proclamation only included a provision for unimpeded operations in the air above the proposed monument. No language was included to protect the vital training that occurs on the land below. This is an unacceptable oversight. …” Hardy said in a statement. “We must protect America’s national security, and that means ensuring that our military has guaranteed access to land located beneath or associated with Military Operations Areas for essential training and readiness activities.”

That move by Hardy should correct a serious oversight, but the delegation needs to pursue with vigor efforts to give local residents a say in how the land in their region is used.

When the Nevada lands bill was introduced, Republican Sen. Dean Heller said, “Currently, with a quick stroke of the pen, the executive branch can lock up millions of acres of public land without consulting the public or their representation in Congress.”

And Republican Rep. Mark Amodei remarked, “There is no good reason for major land-use decisions in Nevada to be done in secret without input from the local community and their elected representatives.”

Just what the land needs to be protected from has never been stated. Besides, the federal bureaucrats already control the land and can deny permits for any use they deem inappropriate or disruptive.

Nevada’s delegation should move swiftly and attempt to block the monument designation and lead Congress in repealing the Antiquities Act entirely.

Oh, yes, that system mentioned above is called feudalism.

A version of this column runs in Mr. Mitchell’s blog.